Eric Wilson and Bud Gaugh met in childhood (in 1979) and later started their first garage punk band, consisting of drums, bass and vocals. They later formed Sublime with Bradley Nowell. The Long Beach Dub Allstars (LBDAS for short) were founded after Nowell died in 1996 of a heroin overdose (frequent contributors to Sublime including Michael "Miguel" Happoldt, Todd Forman, and "Field" Marshall Goodman are also members of the band).

Eric Wilson says, "We will never replace the greatness that Sublime did or what Bradley has done." The band was originally a 10-piece and they recorded their debut recording called Right Back, which shortly after completion in 1999 saw the departure of three members. Their second album, Wonders of the World was recorded and released in 2001. It featured "Sunny Hours" featuring will.i.am from The Black Eyed Peas. "Sunny Hours" was also used as the theme song for the Friends spin-off Joey.

“Every single second is a blessing if you count them all,” sings frontman Matthew Roads. You can hear the sincerity in his voice; the joie de vivre that oozes from everything Tropidelic does is apparent. When they take a stage, their synergy flows member to member ­– horns blow, knees kicked high and grins are passed from one man to the next. Almost immediately, it spreads to the crowd, lifting hands in the air as their feet begin to move. The pulse collectively becomes that of one.

“I‘m realizing more and more every day that you can make anything happen for yourself if you really want to,” says Moon Hooch horn player Mike Wilbur. “You can change your existence by just going out and doing it, by taking simple actions every day.”

If any band is a poster child for turning the power of positive thoughts and intentions into reality, it’s the explosive horn-and-percussion trio Moon Hooch. In just a few short years, the group— Wilbur, fellow horn player Wenzl McGowen—has gone from playing on New York City subway platforms to touring with the likes of Beats Antique, They Might Be Giants, and Lotus, as well as selling out their own headline shows in major venues around the country.

Surf riffs and indie melodies over a rhythmic funk foundation fond of improvisation.

Punk/SKA Band out of Buffalo, NY

We'll see you there! 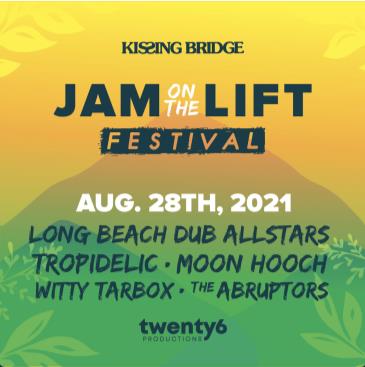