Jamie Fontaine and The Level

Party where the Rock Stars do, with 107.9 KBPI Southat Sunshine Studios Live

American/Alternative rock
Jamie Fontaine & The LeveL is an American alternative rock band formed in 2013 in Green Bay, WI
Comprised of Jamie Fontaine (Vocals/Guitar), Joseph (Joe) Weise (Bass Guitar) and Colby Peters (Drums).
They began playing in a warehouse rented by Joe for a couple years. They would host parties there to play in front of a live audience. Their energetic stage presence began to draw bigger and bigger crowds to the point where they are now playing on national stages. Their energized shows are something that you need to experience for yourself. They have shared the stage with acts like: Saliva, Saving Abel, Crowbar Inc, Rick Monroe and Michael Alexander and Michael Alexander & Big Whiskey.
2018 brought the release of their self-titled debut album "Jamie Fontaine & the LeveL" worldwide as well as their first music video "Stanely".
Jamie Fontaine's musical ability leads the band, while "The LeveL" keeps the surroundings in rhythm.
They bring an energy to their musical that is unmatched. As soon as you hear you hear them play, your ears are filled with an amazingly unique sound.
They all enjoy playing music together which is apparent when you see the great musical chemistry that these three have on stage. 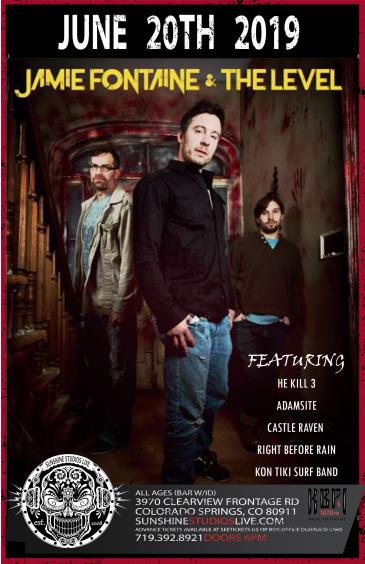 Jamie Fontaine and The Level