Fusing modern attitude with vintage swagger, Jane Lee Hooker exploded off the NYC club scene with 2016’s No B! – a debut album whose rocket-fueled blues covers won acclaim from both Rocks Magazine and American Blues Scene, and led them onto major stages like Rockpalast in Germany, Mountain Jam, and The Big Blues Bender.

Their second album, Spiritus (Ruf Records) finds the band writing their own entry into the great rock 'n' roll songbook. The album was written by the band as a unit, and they hit the studio with producer Matt Chiaravalle then set the controls to 'GO.'  “We wanted this album to sound like we do live – raw and high energy.”

On 'How Ya Doin’' Dana treats this studio album like a live show, bantering with an imagined crowd over revving guitars and hand-claps, 'Gimme That' is a Stones-worthy swagger that blooms into a stomp-and-holler climax, while 'Mama Said' (see video below) features dueling guitars, rumbling bass and a defiant pick-yourself-up lyric. 'Be My Baby' rides on a cool-as-hell guitar part, then there’s 'Black Rat', a blues-on-speed riot with Dana firing her vocal like a machine gun.

In an album of impressive stylistic shifts, there’s also 'The Breeze', a nine-minute blues slow-burner that allows the band to stretch out. 'How Bright The Moon' is a marked change of pace; starting out with piano and a tender, nuanced vocal, which breaks into a roaring soul torch-song.

The band is currently on the Spiritus Tour, which has already included Cincinnati Blues' Winter Blues Fest with Samantha Fish, Belgium's legendary Spirit of 66, and Mountain Jam 2018...

JLH is co-headlining with DR. MOJO BAND for their SF debut show at BOOM BOOM ROOM.

"Spiritus is a boozy rampage driven by stone cold sober passion and the force of five women..." - Liverpool Sound and Vision

"Another cracker from Jane Lee Hooker and another album I can’t prise off my decks." - Music News.com

"...Attitude and swagger by the lorry load...rocks like a mother." - Music Republic Magazine

"As they move from interpreting the blues to creating their own, you can hear an authentic spirit coming through..." - American Blues Scene

"Spiritus keeps a foot in Rock with its snarls as the other toes dig like talons into Blues." - The Alternate Root

“Killer tasty stuff throughout that warms up the cold winter with power to spare.” - Midwest Record

"Chock full of upbeat rock/pop songs that are bound to grab listeners by their throats." - Baby Sue

"Catch some rockin' soul, rhythm and blues at SF's legendary Boom Boom Room. Dr. Mojo draws on a wide range of great music from blues pioneers Muddy Waters, T-Bone Walker and Howlin' Wolf to the Texan vibes of Stevie Ray Vaughan and Freddie King, and the gorgeous Memphis soul of Sam and Dave, Aretha Franklin and Joe Tex.
Soul, rhythm and blues is best delivered with energy and feeling, and that is where Dr. Mojo comes through with the goods. Based on the classic line-up of male/female vocals, tenor sax and Hammond B3 organ, their repertoire ranges from classic soul from the likes of Sam and Dave or Otis Redding, through Texas blues from Freddie King or Lou Ann Barton, to undiscovered gems from blues masters." 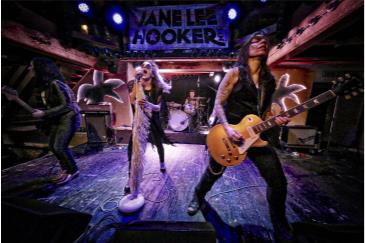