Jason Boland and The Stragglers

About Jason Boland and The Stragglers:

Music is having a moment. Listeners are crying out for something true––some meaty songs that’ll give us some comfort, even as they cut closer to the bone.

Everyone is finally ready for the gritty, thundering country Jason Boland and the Stragglers have sharpened over almost 20+ years’ worth of selling out roomy venues and commanding stages across the nation.

“We’re just trying to make something that we’re proud of,” lead songwriter and vocalist Boland says. “If any more people want to take notice of it, they’re welcome.”

Since coming together in Stillwater, Oklahoma, Boland and his tight knit crew have sold more than half a million albums independently and earned a devoted following that’s swelled far beyond the band’s red dirt roots. At a Stragglers show, oil patch roughnecks, hippies, college kids, and intelligentsia all sway side-by-side like a traveling reincarnation of Austin’s Armadillo World Headquarters in its cosmic cowboy, Willie Nelson heyday.

While the Stragglers draw from rock and folk, make no mistake: they traffic in unfiltered, unfettered honky-tonk, raw and lean.

For 2020, the band is celebrating the 20th Anniversary of their debut album Pearl Snaps with a nationwide tour where the band will play the record front to back along with favorites from their extensive catalog. The legendary record was recorded with famed producer Lloyd Maines and behind the success of songs like “Pearl Snaps” “Somewhere Down in Texas” “Proud Souls” and others it quickly became a beloved classic and still continues to be named as a major influence for many of the top artists coming out of the Texas/Oklahoma country music scene.

Growing up in Winston-Salem, North Carolina, singer-songwriter Caleb Caudle was raised on rock n’ roll and Southern hospitality. Influenced by bands like The Clash and Velvet Underground, Caudle was playing North Carolina’s punk rock circuit by the age of 15. Naturally, his music matured with his age and he became more lyrically driven, adopting a love for collecting vinyl. In 2012, he decided to quit his day job and focus solely on music -- five years and four albums later, Caudle is gaining the traction he deserves. He was recently dubbed “the musical equivalent of high-proof bourbon – rich in flavor, with a subtle, satisfying bite,” by Rolling Stone editors for their list of “10 New Country Artists You Need To Know”. He’s played Nashville’s famed AmericanaFest multiple times and his song, “Borrowed Smiles” was featured on last season’s dramatic season finale of CMT’s Nashville. And as 2018 approaches, he’s not slowing down; he’s on the lineup for the 11th Annual Cayamo, the musical cruise that travels from New Orleans to Cozumel, Mexico, and Belize, next to icons like John Prine, Buddy Miller, Brandi Carlile, Patty Griffin, and Lee Ann Womack. And most importantly, he’s gearing up to release his eighth and most refined album yet, Crushed Coins. 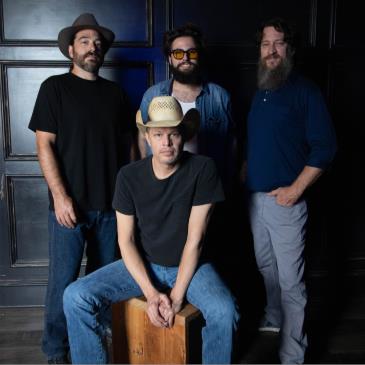