The "Godfather of Americana" and the lead singer of Jason & the Scorchers is here to bring his solo Americana music to the people. Join us for a night with this renowned singer-songwriter at The Blue Note Grill in Durham, NC.

"You can't keep a good man down and Jason Ringenberg is one of the best of them. Boosted by the reception and satisfaction of his 2018 album STAND TALL, everybody's favourite cowpunk, witty, incisive, intelligent lyricist is back with another record as deep and broad as its predecessor. RHINESTONED is a passionate release depicting every inch the portrayal of Jason Ringenberg, namely historical curator, proud custodian of a style and blessed with a cavernous conscious. The starting point of this album may have been some of the leftovers of the previous record, but it has soon developed its own entity and matches up well with what Ringenberg has produced in a long career whether heading the Scorchers, playing up to the Farmer Jason moniker or just the plain solo act with something to offer." ~ Three Chords and the Truth 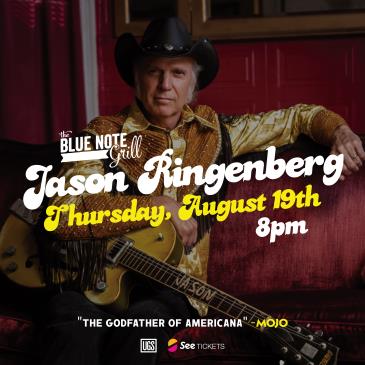