What would you get if you blended the economy of The Edge with the blowtorch blues of Jack White, added to the direct, narrative songwriting of Tom Petty and the dramatic flair of The Killers? Probably something like Jay Van Raalte. The Charleston native’s musical endeavors have ranged from old school blues to folk/country, from musical theater to modern rock, but three things remain constant: thoughtful guitar playing, perceptive songwriting, and a strict attention to detail and arrangement. All of this is on display in Linearity, the Reverend Guitars featured artist’s debut release. The self-produced EP features Van Raalte on nearly every instrument, but bringing the songs to life onstage requires a team: Derk Van Raalte (bass) and Bradley Palles (drums) make up the rest of live band Jay Van Raalte and The Spectrum, providing a rock-solid foundation for Jay’s fiery guitar playing.

Lynx Deluxe is a Georgia powerhouse.  The band's songs are "hooky rockers" that draw from writer Andy Brown's English beginnings and still clearly feature the raw power seen in his earlier work. As described by Atlanta-based music journalist Chad Radford, "Browne’s songwriting resonates with a deeply buried and universally shared note that rings out in all of our minds." The band has a live show to match.  “This band sure cannot be pigeonholed into one genre, they do it all and throw it all together to make a great unique sound!” 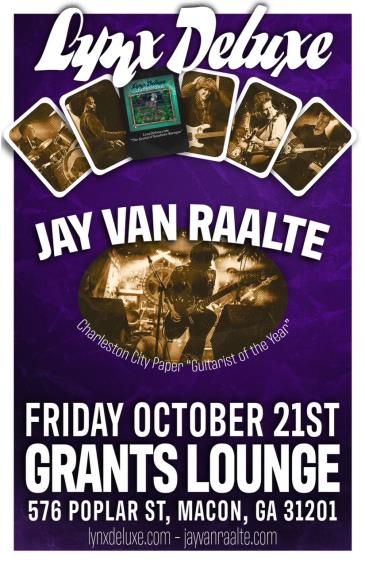