We are delighted to bring back our exciting Sunday Jazz Brunch at Bearsville Theater with Joel Harrison Trio.

Guitarist, composer, arranger, lyricist, writer, educator, and vocalist Joel Harrison has “created a new blueprint for jazz” (New Orleans Times-Picayune). A Guggenheim Fellow (2010) whose compositions have been commissioned by Chamber Music America, Meet the Composer, New Music USA, the Jerome Foundation, NYSCA, and the Mary Flagler Cary Trust. He has released 23 CDs as a leader on seven different labels. Harrison’s music may be founded on jazz but veers into classical, rock, country, and all manner of American roots music. Succinctly described by the New York Times as “protean… brilliant,” he is also an active film composer, having worked on the Oscar-nominated Traffic Stop and the Sundance awardee Southern Comfort. Harrison is the founder and director of the Alternative Guitar Summit, a yearly festival devoted to new and unusual guitar music. The festival has featured such artists as Nels Cline, Bill Frisell, Julian Lage, Michael Gregory Jackson, Mary Halvorson, and Pat Metheny, who has called the Summit “one of the most interesting and distinguished forums for guitar on the planet.” He is the author of “Guitar Talk: conversations with visionary players.”

An eclectic musician, Gary has been playing gigs, in all styles of music, since he was eleven years old. He graduated from Berklee College, where he played with well known jazz players Bill Frisell, Mike Stern,
Kevin Eubanks, and George Garzone, to name a few. After graduating, he moved to NYC where he started a group, recording and performing his original compositions that featured Bill Frisell on guitar. Gary performed as a regular member of both the Ed Palermo big band, and the Tom Pierson Orchestra in NYC.

Gary has played rock, pop and R & B all his life, performing with The Mama's and Papa's,  Martha and the Vandella's, and Popa Chubby, among others. No stranger to World Music, Gary has formed two world/jazz groups. Nostos with Satoshi Takeishi,and One World Trio (Rome and NYC editions). He has performed/recorded with Latin, Flamenco, Armenian, Turkish, Greek, Persian, and Indian music ensembles such as: Bobby Sanabria y Ascencion, Jose Jose, Harmonic Motion, Haydeh, Satar, Daryush, and Debarshis Battacharya.

While he may be best-known as the polyrhythmic heartbeat of the Grammy-nominated band Brazilian Girls, Aaron Johnston is more than just a "remarkably fluid drummer," as the New York Times has dubbed him. A Verve recording artist, writer, producer, arranger, programmer, vocalist, and engineer of the highest caliber, his diverse skills have made him one of Latin and American music's most sought after collaborators.

In Los Angeles, he quickly became a first-call session and touring drummer for the likes of Desmond Child and the Pete Escovedo Orchestra. After relocating to San Francisco, he found himself performing and recording with a slew of legends: Darol Anger's Heritage Project (featuring Willie Nelson and Mary Chapin Carpenter), Mike Marshall’s Choro Famoso, Andy Narell, Sheila E, Omar Sosa, and Katoja among others.  All the while, he was producing and recording jazz albums with his own celebrated group, Blue People.

In 1998, Johnston moved to New York City, where he earned spots behind the kit with everyone from Harry Belafonte, Angelique Kidjo and Me'shell Ndegeocello to Wax Poetic and Latin pop star Thalia. But it was his own full-time group, Brazilian Girls, that truly launched him into the spotlight. The band released three albums on Universal Verve Records, garnering a Grammy nomination for Best Electronic Dance Album, critical acclaim from Rolling Stone and SPIN, tour dates with Sting and festival slots from Bumbershoot to Bonarroo, Coachella and Lollapalooza. 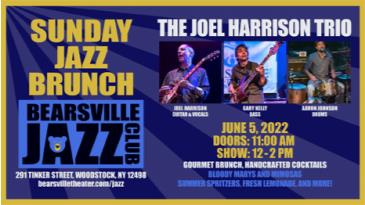