Emily Einhorn is a Brooklyn based jazz vocalist who grew up in the Hudson Valley. She was immersed in jazz and classical music from as early an age as three, when she began learning to play the violin. Through all of her childhood and adult life, she has performed as a jazz vocalist throughout the Hudson valley and New York city, while also writing, recording, and producing her original compositions. She graduated from Skidmore College in 2019, where she participated in a wide range of musical projects while also earning a double degree in International Affairs and Business. Emily is now based in Crown heights where she continues to study, perform, and compose jazz music.

Guitarist / composer,  Peter Einhorn’s most recent recording is “Seems Like Old Times”.  His recordings can be sampled at www.petereinhorn.com . Among them are Karl Berger’s “StillPoint” (Sunny Moon Records), Ira Sullivan's "Strings Attached"(Pausa Records), as well as recordings as a leader including “Bouganvillea”.  He has performed and / or recorded with Joe Lovano, Jimmy Cobb, David Amram, John Abercrombie, Steve Kuhn, Eddie Daniels, Roland Hanna, Plácido Domingo at the Met Opera, and others.  “..an original statement by a mature artist.” -National Public Radio.  “Jazz After Hours” host Jim Wilkie. (for “Bouganvillea”)  "...a man whose guitar playing and composing I've enjoyed for years."

Drummer, Matt Garrity, has been on the New York City music scene since 1994. He has performed with some of the best in the business, including Grammy winner, Vincent Herring, David Williams, Teri Thornton, Peter Bernstein, Gary Versace, Ron McLure, Ed Cherry, Ben Monder, Ratzo Harris, Jeremy Pelt, Steve Slagle and Jerome Richardson, among others. Garrity has been living in the Hudson Valley since 2017 and produces a concert series out of his studio called Barnstock. 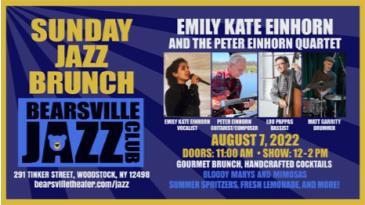