Through her work with such avant-jazz musicians as Don Cherry and Karl Berger, Ingrid Sertso established herself as a captivating, adventurous vocalist, capable of blending jazz, African, South American and other world beat influences into a distinctive, hypnotic sound.  Although Sertso didn’t become well-known until the release of Dance with It in 1994, she spent over 20 years honing her art.

Berkeley, California-born and based in Brooklyn since 1998, saxophonist/pianist/drummer and composer Peter Apfelbaum is best known as leader of the genre-mashing world music big band, Hieroglyphics, which he formed while still in high school in 1977. The ensemble, which began to attract international attention in the 1980's for its unique fusing of elements of world music with the aesthetics of the jazz avant-garde, helped launch the careers of fellow Berkeleyans Joshua Redman, Benny Green and Steven Bernstein, among others.  Apfelbaum has also worked with Don Cherry, Cecil Taylor, Karl Berger, Bill Laswell and Phish.

John Menegon is a jazz bassist, but is also a guitarist, arranger, singer, and composer. He began his career as a musician in Montreal before moving to New York City, where he spent ten years as bassist for two legendary tenor saxophonists, Dewey Redman and David “Fathead” Newman. This experience provided a solid foundation for Menegon to continue his explorations as a bandleader, composer and arranger, and he has been composing and arranging music throughout his career. Menegon has released five CDs as a bandleader and currently plays with jazz legend Joe Lovano as well as numerous other stellar musicians, and is a member of SHARP 5, a newly-formed Brazilian Jazz band. 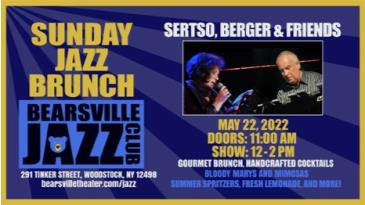