The Education Led By Emile Martinez

Emile Martinez is a Los Angeles-raised and two-time Grammy nominated trumpeter, composer, arranger, producer, and educator. A graduate of California Institute of the Arts with a Masters of Fine Arts and a presidential scholar recipient from Berklee College of Music, Martinez started his trumpet journey at the age of ten. He has studied with trumpeters including Clay Jenkins, Oscar Brashear, James Ford III, Charlie Lewis, Wadada Leo Smith, and Ed Carroll. Martinez's interactions with his mentors not only motivated him musically and creatively but motivated him to become an educator to inspire creative pathways and to help guide future generations through their musical journeys.

Martinez is the trumpeter with Katalyst Collective, Jonah Levine Collective, and leads his group, The Education. While many would say Martinez is a jazz musician, he says otherwise. Martinez has expanded his repertoire having listened to, performed, and recorded with artists and musicians of various genres including Hip-Hop, R&amp;B, Neo Soul, Classical, and Soul Electronica. 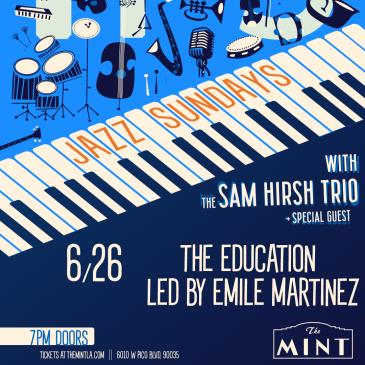