Join us EVERY SUNDAY for a rotating selection of the best in LA's Jazz Music scene, and stay late for our Sunday residency with The Sam Hirsh Trio.

Musicians who want to jam get in free with an instrument after 9pm (one drink minimum).

The California State University Northridge Jazz Studies program is committed to progressive education, inclusive mentorship, and creating life-changing opportunities for our students. We provide a welcoming, communal environment for students to explore their creativity in balance with learning fundamental jazz tradition and practical professional skills. Diverse, internationally recognized faculty guide students in their artistic and professional development throughout their time at CSUN and beyond. 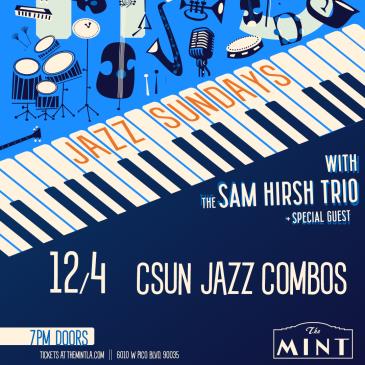