Join us EVERY SUNDAY for a rotating selection of the best in LA's Jazz Music scene, and stay late for our new Sunday residency with The Sam Hirsh Trio.
Musicians who want to jam get in free with an instrument after 9pm (one drink minimum).

The original Jazz Butchers have evolved into the current musical line-up featuring Matt Lilley on Sax, Dave Curry Bass, Gustavo Ramirez on keys and piano, and Jim Matthews on drums. In addition to these musicians are Roger Johnson on Percussion and Ron Blake on Trumpet and Flugelhorn.

The Jazz Butchers performs primarily in the greater Los Angeles/Southern Cal area. Compositions are all original with elements of modern, alternative, and "straight ahead" jazz, and fusing these with Latin, Blues, Funk and other elements making the experience unpredictable and spontaneous.

The songs are upbeat and Inspiring, having a unique local sound reminiscent of the experimental days in Los Angeles circa 1970 -1980. The music on this album is inspired and attributed to people and places that developed the albums character. 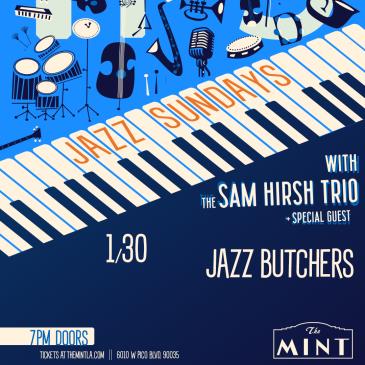