Processing...
Tickets
Tickets are available at the door for $15  ($12 after 9pm for the Sam Hirsh Trio)

Through their unique instrumentation, they have masterfully developed an electro acoustic sound that melds Jazz, funk, and music from around the world. TriTone Asylum’s music reflects the varied musical landscape of the sounds and street rhythms of Los Angeles. Their original songs are influenced by a variety of artists including Freddie Hubbard, Herbie Hancock, Weather Report, Pat Metheny, as well as artists from the ECM Label.

TriTone Asylum is frequently featured at Baked Potato and other noted jazz venues of L.A. 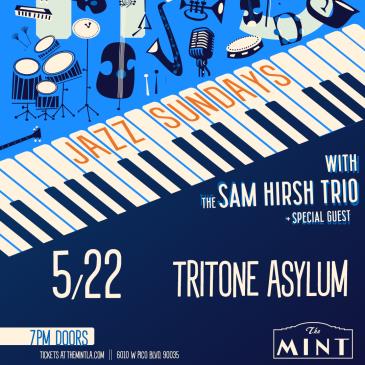