Songwriter and comix artist Jeffrey Lewis began recording homemade cassettes in New York City in 1998; his critically acclaimed, unusual and word-dense songs lead to Jeffrey signing to Rough Trade Records in 2001 (record label of The Smiths, The Strokes, Belle & Sebastian, etc.). Creating a brilliant style of scuzzy urban indie-rock-folk, like a 21st Century mash-up of Sonic Youth, Pete Seeger and R. Crumb, Jeffrey has played countless gigs all over the world, both solo and with bandmates, including playing as the opening act for bands like the Mountain Goats, Daniel Johnston, Stephen Malkmus & The Jicks, Dinosaur Jr, The Fall, Dr. Dog, Pulp, Roky Erickson, The Vaselines, and more.

His most recent official album is “Jeffrey Lewis & The Voltage: Bad Wiring” released on Don Giovanni Records (USA) and Moshi Moshi Records (internationally) in November 2019 (garnering rave reviews), but Jeffrey has also digitally self-released three DIY albums from his apartment since the pandemic started. Jeffrey continues to wring folksy spiel and garage bohemianism from his ramshackle guitar, whether with his full band or solo, while sometimes incorporating his often politically subversive visual artwork and cartoons into live appearances. Some of these audio/visual projects have been hosted on History.com, such as “The Story of Sitting Bull,” a Jeffrey Lewis illustrated song which won a Webby Award in 2011 for “Best Writing on the Internet;” Jeffrey's “The Story of Keith Haring” was commissioned by the Museum of Modern Art in 2021.

As of 2022 the 4-piece line-up of Jeffrey Lewis & The Voltage includes Mallory Feuer on violin and keyboard, Mem Pahl on bass and Brent Cole on drums.

“Jeffrey is the best pure songwriter I know of... 'Sad Screaming Old Man'… is one of my favorite songs ever written” – David Berman (Silver Jews)

Tongo Eisen-Martin is the current poet laureate of San Francisco. He’s also an educator and organizer whose work centers on issues of mass incarceration, extrajudicial killings of Black people, and human rights. 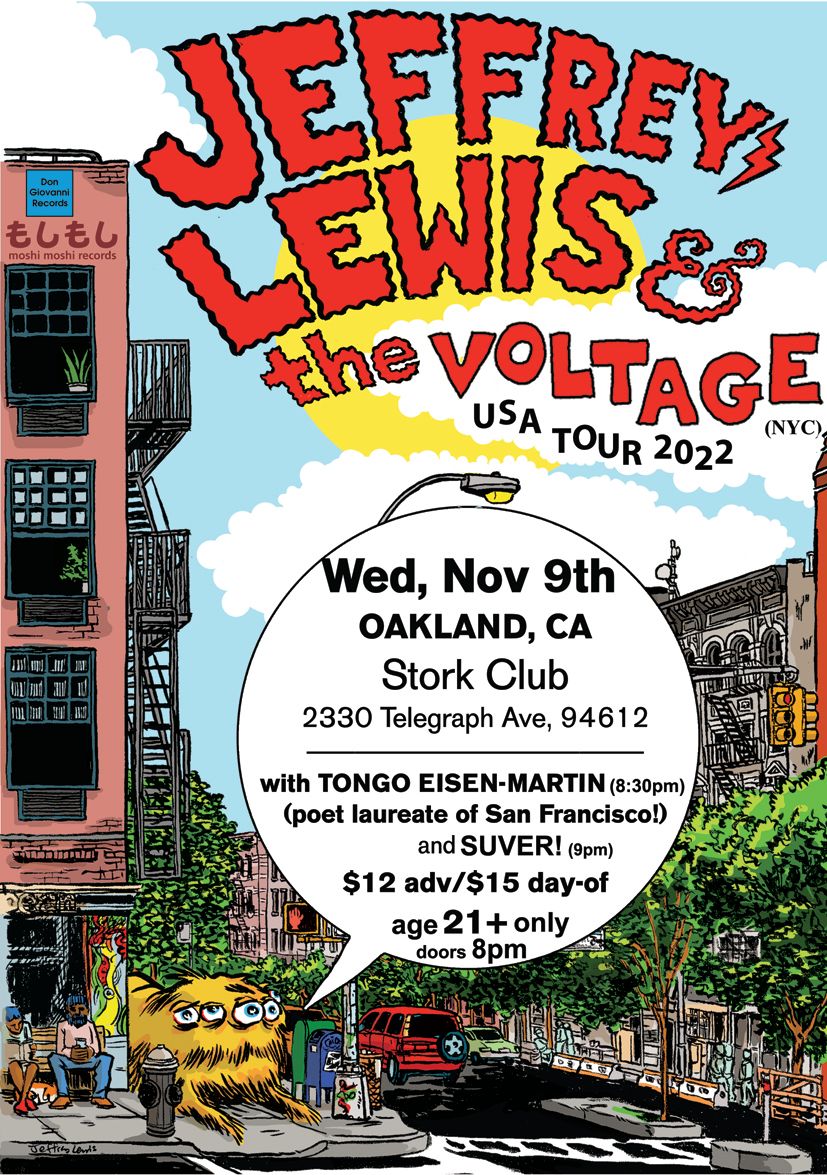