Charming, soulful, and full of life - Jemere Morgan had the best of both worlds growing up between Brooklyn and Jamaica. Gaining his dynamic style and rooted personality, Jemere took to rap music until one day, his dad was shocked when he heard him singing. Before he knew it, Jemere moved to Atlanta to start a singing career and initiate building Dada Son Entertainment.This next phase of Jemere's life was the start of defining a dream of following in his family's footsteps as the new outstanding reggae phenom. Heir to the legendary Royal Family of Reggae Music Morgan Heritage, Jemere toured across the world as an opener for his family for years, gaining artistic and worldly experience that can only be taught on the road. After releasing music and collaborating with notable artists such as Joe Mersa Marley, J Boog, and Stonebwoy, and earning a Grammy Award for his feature on the Best Reggae Album, Jemere's new single featuring Wyclef Jean, "My Kingdom" released in Februaray of 2021.
Just added Willz  Native Hawaiian Reggae artist William Alohi Kauhane, better known as Willz, is an Oahu-born singer/songwriter/producer. At age five, Willz and his family moved to Volcano, located on the big island of Hawaii, where he now operates his recording studio, Glory Sound Studios. His musical journey began when he was ten years old; his grandmother would make him listen to classical music, and then soon after, he started taking piano lessons. Willz singing career would spark when he would play Guitar hero and started covering all the artists from the video game-like Gunz & Roses and The Police. As soon as Willz began high school, he started getting into reggae music and was inspired by reggae legends Bob Marley, Gregory Isaac, and Don Carlos. Willz also is inspired by local talent Oahu’s own The green and Big Island band, The Steppas, who would be a big part of shaping his sound today. Willz has recently stepped away from touring multi-grammy-nominated reggae artist J Boog and Big Island band One Rhythm to pursue his solo career.
With special guests Dirty Tribe & P.O. Boxx 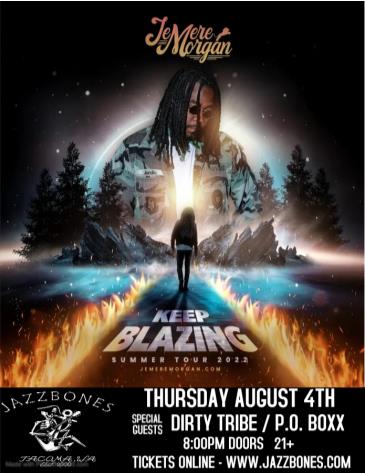