Raised in small town central Texas and based in Nashville, Tennessee, Joelton Mayfield crafts hard-hitting alt-country that’s at home in dive bars and DIY venues alike. Mayfield’s distinct take on the genre blends Wilco-esque musicality with the dynamics and melodic edge of second-wave emo to create a sound all his own. This musical innovation underscores Mayfield’s deft lyricism, which draws a Southern Gothic literary sensibility and deals intimately with the tensions embedded in family, religion, masculinity, and love in the American South. Mayfield is currently working on a follow up to his 2019 debut release I Hope You Make It.

At some point, all roads lead home—not just physically, but emotionally and spiritually as well.

Returning to square one, Parker Gispert comes full circle on his second full-length solo album, Golden Years [New West Records]. With an electric guitar in hand and the amps cranked up, the Atlanta-born and Nashville-based artist delivers a collection of introspective, yet gruff rock ‘n’ roll anthems underlined by eloquent riffing, rollicking grooves, and pensive lyricism. After a whirlwind journey at the helm of The Whigs and as a solo artist, he delivers a record cognizant of both where he’s been and where he’s going.

“It felt really great to bust out the electric guitars, plug into the amps, and hit the pedals,” he smiles.

“Golden Years is the culmination of everywhere I’ve been so far artistically. In terms of my solo material, I was out touring by myself and playing acoustic, so I hadn’t touched an electric in years. Playing rock again was like riding a bike I hadn’t been on in a minute. It’s really the album I’ve wanted to make for a long time.”

As the story goes, Parker co-founded The Whigs during college. The group went on to attract a global fan base over the course of fan favorite albums such as Give ‘Em All a Big Fat Lip [2005], Mission Control [2008], In the Dark [2010], Enjoy the Company [2012], and Modern Creation [2014]. Along the way, they shared stages with everyone from Kings of Leon to Black Keys and lit up late-night television programs, including Jimmy Kimmel LIVE! Following a 2017 hiatus, he made his debut as a solo artist with Sunlight Tonight. Eschewing feedback and fuzz in favor of dusty acoustic ruminations, it arrived to tastemaker applause from Glide Magazine and FLOOD who declared, “Parker Gispert shines on Sunlight Tonight.” He launched a packed headline tour in addition to hitting the road with Valerie June, SUSTO, RNDM, and the Futurebirds. In between, he even co-wrote “Private Public Breakdown” for Alice Cooper’s Paranormal with Bob Ezrin and Cooper. As the Global Pandemic consumed 2020, he retreated inward.

Catching his breath during a reprieve from the road, he experienced a revelation.

“I decided what I really wanted to do was to make a rock record,” he affirms. “It was a response to being quarantined and not being able to go to shows or hang out at rock clubs. I was trying to visualize what I would want to see if I was able to get out. For me, that was electric guitars and solos. Lyrically, it was vague, but still inspired by what was happening in the world. Musically, I got back to what initially inspired me as a child of the nineties.”

Under the influence of Nirvana, Soundgarden, Pearl Jam, Stone Temple Pilots, and Built To Spill, he entered the studio with producer Roger Moutenot [Lou Reed, John Zorn, Yo La Tengo] in 2021.  He would be joined by drummer John Kent [Ben Kweller], longtime guitarist Evan Penza on lead, Thayer Sarrano on keys and backing vocals, and Rob Crowell [Deer Tick, Midland] on bass. For as much as Parker nodded to his roots, he ventured into new territory.

“In The Whigs, we never had lead guitar or really any keyboards,” he goes on. “This is the fully realized rock dream for me.”

The opener and title track “Golden Years” pairs breezy clean guitar with wistful vocals before a soaring solo. He unlocks a rush of nostalgia, scrapbooking moments in a luminous hook as he affirms, “I promise to remember along the way. The golden years are here.”

“I was at my parents’ house, and I was looking at all of these old photos,” he recalls. “When you’re in the moment going to prom or something, you’re probably thinking about the exam next week or the girl you want to make out with. You don’t think that some of these experiences will be the formative best times of your life. Since we get preoccupied with what we have to do, it’s hard to realize you’re living in the Golden Years, so this is a reminder.”

He amplifies the grit on “All The Rage.” The crunchy groove cuts through a steady beat before a hauntingly hypnotic hook. To drive it home, a lead cries through the wah pedal.

“Whether I was watching the news or even ESPN, the common theme was anger,” he sighs. “People are arguing constantly. Our society is unified by what we hate. That’s not a great place to be. Dignity, respect, and tolerance aren’t present. I’m not blaming the media, but they’re not helping us settle down.”

On the other end of the spectrum, “You And I Forever” hinges on a fluttering melody tempered by six-string bliss. “It’s a straight-ahead personal love song,” he goes on. “It’s something I’d never written before with a pure idea and a lyric that repeats itself over and over again.”

“It seems like evil actors in the world thrive when everything is in total chaos, up is down, and left is right,” he observes. “They’re happiest when they’re trying to seed discord. I took the angst in the air and channeled it into a nineties-style rock song.”

“Stuck Inside Someone Else’s Dream” slips into an ethereal bridge as Parker transmits a crucial message.

“It’s about staying true to yourself, living your own truth, and not living a life based on someone else’s expectations,” he elaborates. “You’re not acting as a conduit for another person’s dreams. You’re drawing your own path instead.”

Parker has most definitely drawn his own path on Golden Years, and it’s gloriously personal.

“I’m just a rock ‘n’ roll artist,” he leaves off. “I feel a little more comfortable in who I am than I ever have before. I’ve been through a decent amount career-wise, and I’m proud of what I’ve made. I hope you turn it up and listen loudly.”

Parker grew up in Atlanta, Georgia and later lived in Athens, Georgia where he graduated from the University of Georgia with a degree in Philosophy.  He currently lives in Nashville, Tennessee. 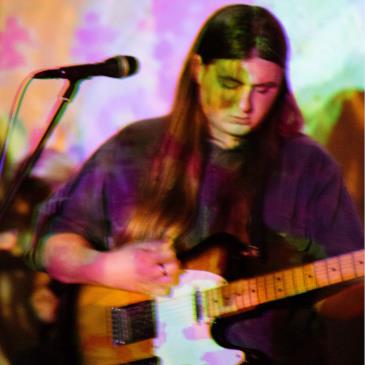