Jon released his debut album, Indiana, in 2007 on Island Def Jam, highlighted by the single “Beautiful Disaster.” He’s released four full-lengths in the ten years since and revealed a true evolution in both his piano playing and singing. He’s played shows with Billy Joel, Kelly Clarkson and Adele, collaborated with longtime friend Sara Bareilles, co-written with Demi Lovato and even performed his original song “So Close” from Disney’s Enchanted at the Academy Awards in 2008.  Over the past decade, the musician has unveiled music on both a major and an indie label, and now self-releases his creations as a fully independent artist

On New Year’s Day in 2013, Kris Allen and his then-pregnant wife Katy were in a head-on collision that left the singer/songwriter/guitarist with a career-threatening shattered wrist. In the two years that followed, he underwent three surgeries, re- learned how to play guitar (despite regaining just 30 percent movement in the
damaged wrist), recorded his third album, and toured relentlessly – including a two- month-long stint that started just one week after his accident. The American Idol season 8 winner ultimately retreated from the whirlwind and immersed himself in a songwriting spell that yielded more than 70 new tracks. Culled from the collection of songs, Allen’s fourth full-length album Letting You In finds the Nashville-based artist delivering his most intimate and dynamic work to date.

The follow-up to 2014’s Horizons, Letting You In builds off the soulful musicality Allen first showcased with his platinum-selling 2009 single “Live Like We’re Dying,” But with its sophisticated songcraft and vulnerable lyrics, Letting You In reaches a new depth of feeling that infuses each track with undeniable emotional power. “Looking back, I think I tired to put off dealing with my feelings around the accident for as long as I could,” says Allen. “But in the past year I’ve realized how much it all
affected me, and that definitely came out in the writing of this album.”

Allen recorded in Nashville with producers Konrad Snyder (Mat Kearney, Owl City, Milo Greene), Ian Fitchuk (James Bay, Drew Holcomb & the Neighbors, Griffin House), and Grammy Award-winner Brown Bannister (Amy Grant, Kenny Rogers, Steven Curtis Chapman) and made a point of exploring both the bright and dark elements of everyday life. “There’s almost two different sides to the record,” Allen
notes. “On one hand you’ve got these happy love songs, because that’s life – I’m a happily married guy, everything with my family’s really great. But internally I was going through some things and trying to figure out my life, and the rest of the album very much came from that.”
The latter category of songs includes “My Time Will Come,” whose lyrics reflect on Allen’s struggles with self-doubt (“Lately I’ve been making friends with the doubts in my head/Hanging on every word that they’ve said”). But with its lilting guitar melodies and soaring vocals, the song ultimately emerges as anthem of gritty perseverance. On “If We Keep Doing Nothing,” Allen offers a poignant look outward.
Written in the wake of the mass shooting at Oregon’s Umpqua Community College, the song’s throwback-soul arrangement of stark guitar tones and stirring organ lines provide a powerful backdrop for a determined meditation on gun violence.

While Letting You In takes on its share of weighty matters, the album radiates a
hopeful spirit that’s got everything to do with Allen’s easy warmth and open- heartedness as a songwriter and vocalist. One of Letting You In’s most uplifting tracks, “Way Up High”, blends cascading guitar lines, breezy melodies, and slice-of- life storytelling that came to Allen while flying back home after spending days away from his family. “Usually when I’m writing a song I start with the music, but with ‘Way Up High’ the lyrics all came to me in a poem form,” he says. “I just tried to get down all these thoughts that were rolling through my head at the time, in a very stream-of-consciousness sort of way, and it all felt really natural.” And among the love songs that make up much of Letting You In is “Waves,” whose gospel-inspired harmonies and spirited piano work perfectly capture the tenderness in Allen’s
opposites-attract serenade to his wife.
Allen first picked up the guitar at age 13, after spending much of his childhood singing in church in his hometown of Jacksonville, Arkansas. Writing his first song in his late teens, he self-released an album at age 22 and auditioned for the eighth season of American Idol the following year. Several months after his Idol victory, Allen put out his self-titled major label debut, with lead single “Live Like We’re
Dying” climbing to the top 20 on the Billboard Hot 100. In addition to releasing his sophomore album Thank You Camellia in 2012, he spent the next several years sharing stages with such artists as Maroon 5 and Keith Urban, as well as landing Billboard, Teen Choice and People’s Choice Awards nominations.

In the aftermath of his accident, Allen devoted himself to relearning guitar, adjusting his technique to adapt to the lack of movement in his wrist. “At first I thought I’d never be able to play again,” he recalls. “But once I got my case off, I spent more time playing than I ever had in my life. Through all that I realized that I shouldn’t take my craft for granted, so I really focused on developing it and becoming even stronger as a guitar player than I ever was before.”

Along with rebuilding his guitar skills, Allen revamped his approach to songwriting and soon saw a resurgence in his creativity. “When I’ve made albums in the past, there’ve always been other artists and songwriters that I was using as reference points,” says Allen, who names Stevie Ray Vaughan and Stevie Wonder among his earliest inspirations. “But this time I shut myself off from all that, and just focused
on making music that was completely true to me.”

That process proved both thrilling and daunting, but in the end instilled him with a new sense of purpose as an artist. “When I first started making music, it was very much coming from a place of ‘Are people going to like this?’” he recalls. “But as I was making this album, it really became more about being genuine and writing songs that feel good. My hope is that if those songs mean a lot to me, they’ll mean a lot to
the people listening, and that they’ll get some of that hopeful feeling too.”

Since the release of Letting You In, Allen has released an anthemic single about the depth of love outlasting life called When All the Stars Have Died (2018). Kris will also be heading out on a solo tour to celebrate his 10-year long career with fans all over the United States. For more info on dates and tickets, visit krisallenofficial.com. 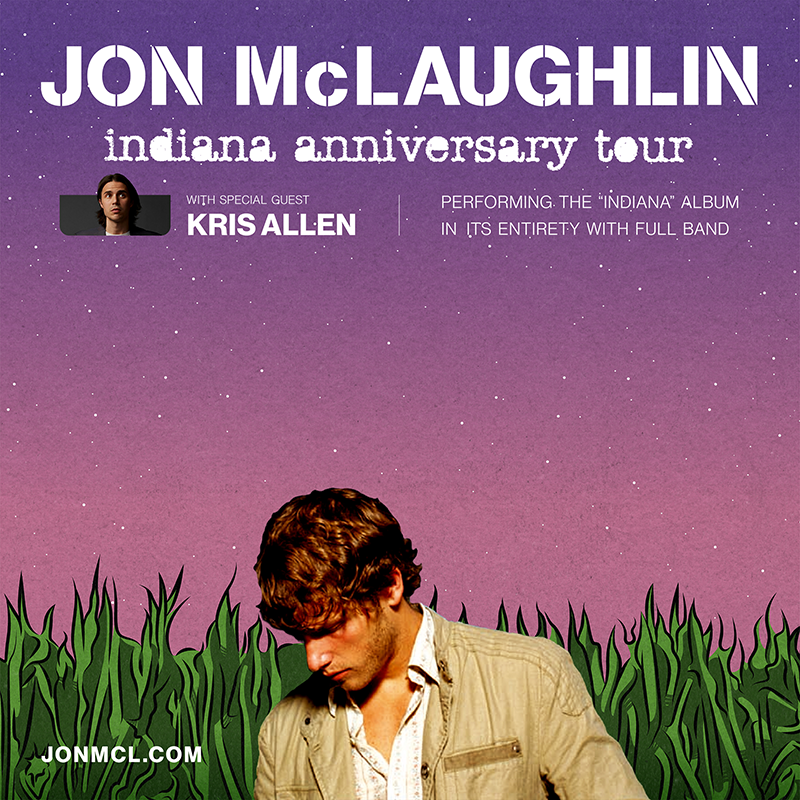