The Josh Miller Blues Revue is:

This is a presentation of what a Chicago Blues Band is all about, by guys who knew and loved the giants of the music. As simple as it sounds, it’s a rare occurrence nowadays. Most of the giants are gone, and most Blues bands today are influenced by modern contemporaries, incorporating modern sounds. The Josh Miller Blues Revue is more akin to single-barrel aged spirit: steeped in tradition, carefully crafted, and revered by professionals and aficionados alike —made to be enjoyed and savored, but not so pretentious that you can’t toss a shot back if the feeling gets you.

Jim Mckaba from Brooklyn, New York studied at the University of Florida, and began playing blues with fellow New Yorker Little Joe Berson in Gainesville. When Muddy Waters came to Gainesville, Joe got Muddy’s band to come and play at their place. Barrelhouse Chuck credited Jim’s leaving to play with Paul Oscher as the reason he got started playing piano. Jim recorded Charles Solomon “Crown Prince” Waterford’s final album, It’s All Over But The Shoutin'.

Jonathan Buck from Bronx, New York. He and Jim have been sharing the stage for 30 plus years. Jon played the Rendezvous du L’erde Festival in Nantes, France in 2004. Jonathan has also played and recorded with Josh and Little Mike over the past 20 years.

Josh Miller met Jon and Jim when he started playing guitar for Little Mike and the Tornadoes starting in 1999. Josh was a younger man when they met, but he came with a solid foundation of the music from playing with Steven Allen Miller in Cocoa Beach. Steve had backed Elvin Bishop on the Hammond organ, recorded with Earl Hooker, and settled in Cocoa Beach. Jim said, “this guy showed up playing the Honkey Tonk and the Okey Dokie Stomp”. Josh also performed on the Crown Prince Waterford’s All Over But The Shoutin'.  He played with Ray Charles alumni and band leader Leroy Cooper in a Hammond B3 combo.

Jeffery Stanton is a young singer and musician from Cocoa Beach who has been playing with Joshua since 2010. An extremely talented multi-instrumental musician who has been learning and playing the bass and taking in all the the roots blues influences that Josh has been giving him, Jeff is sometimes seen on stage with Little Mike and the Tornadoes. When he’s not playing bass, he’s running his own eclectic group of musicians as the Jeff Stanton Trio.

Jake and Josh met at a Central Florida Blues jam when Jake was 20, and now Jake is beginning to receive his own deserved notoriety after being featured on Tony Holiday’s recording, Porch Sessions, with some real heavyweight harmonica players. He’s currently touring with AJ Fullerton and has just wrapped up his own recording, which was produced by John Nemeth.

Also performing will be Dr. Jules & Friends. After failing to catch on in Nashville as the “Weird Al Yankovic of Country Music”, he moved to the Hill Country of Texas and discovered the Blues. Dr. Jules Gliesche has been on a crusade to preserve the Blues and spread the sound, with three CDs of original material and a fourth on the way, often with skeptical and humorous lyrics. 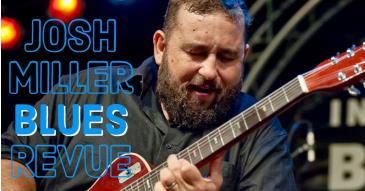