Processing...
Tickets
Josie Dunne’s Indianapolis show at LO-FI Lounge has been cancelled.   Refunds are available at point of purchase.  Online buyers will be refunded in 1-3 business days. Please direct any questions to boxoffice@mokbpresents.com. You can follow our ongoing list of affected shows here: http://bit.ly/mokb-hifi-covid19updates

Josie Dunne’s Indianapolis show at LO-FI Lounge has been cancelled.   Refunds are available at point of purchase.  Online buyers will be refunded in 1-3 business days. Please direct any questions to boxoffice@mokbpresents.com. You can follow our ongoing list of affected shows here: http://bit.ly/mokb-hifi-covid19updates
----------------------------

When most effective, music possesses an almost supernatural ability to take listeners on a vibrant journey. Listen closely to a well-constructed song, and an artist’s pathway to the present comes into laser-sharp focus. To that end, if ever one was curious where Josie Dunne stands at a given point in her life, her sophisticated and ever-soulful songs told the tale. Songwriting then, for the 22-year old breakout singer, has always been a matter of “deep diving into who you are as a person,” she offers. Because you have to be super self-aware to figure out your sound.”  Having worked as a professional songwriter since age 16, and now on the cusp of releasing Late Teens Early Twenties, her soul-baring second EP for Atlantic Records, Dunne says in so many ways we have been and are continuing to play witnesses in real time to her self-discovery.

“You’re hearing me grow up — the real growth spurt,” the singer says of her meandering road towards finding herself and, in the process, her unique brand of soul-infected pop. On Late Teens Early Twenties, a collage of sweet-and-sticky pop and timeless soul, “You’re seeing me learn these lessons for the first time,” Dunne says of her warts-and-all storytelling that, in conjunction with an electrifying sonic evolution, makes her one of the most thrilling, buzzed-about young pop stars of the moment.

To hear Dunne tell it, Late Teens Early Twenties is the clearest distillation of her sonic and lyrical maturation. The process of constructing  To Be The Little Fish, her debut EP released last year via Atlantic, was a soul and sound-searching process Dunne likens to a healthy dose of trial and error. Only a teenager at the time, she experimented with a mélange of sounds and styles. Not until she wrote and recorded “Old School,” that EP’s centerpiece and her breakout single, did she feel she’d truly found her musical voice. “When we wrote Old School,” she says of the sticky-sweet single directly inspired by her parents’ relationship, “everything shifted. I was like, Boom! That’s the direction!” she recalls, noting how prior to its completion she’d felt compelled to write for any and every genre, but in pinning down what made her tick -- fresh and funky soul music with a contemporary pop flair--  she finally felt at home.

What Dunne is perhaps most excited about, however, is that her artistic evolution is an ongoing one. So much of that, she notes, can be witnessed via her mesmerizing live show. Dunne admits at first she suffered from terrible stage fright– “You could probably literally see my hands shaking” – but that’s hardly the case anymore. Having toured with a wrecking crew of top-notch A-list musical talent, from Julia Michaels to Andy Grammar and Ben Rector, she’s become a confident and charismatic must-see entertainer. “It’s been really fun for me to give life to these songs,” she says humbly of taking her infectious anthems from the studio to the stage, and in the process developing a fervent fan base.  “It’s been amazing because it’s such a great challenge but also anything is possible. You just keep learning.”

Dunne also says that it’s been entirely self-empowering learning how it’s not only acceptable but advantageous to forever be discovering fresh avenues of her creative DNA.  “Because every time I’d write a new song people would say, “How does it compare to the last one?” And my answer always was, “Um, I thought I knew who I was and what I sounded like but now I guess this is really it” To honest,” she continues, “I realized that as a human being growing in the world your sound  and perspective are always going to change. And that’s a beautiful thing.”

Which leads back to Late Teens Early Twenties. Sure, Dunne admits the title pays tribute to that critical time period between adolescence and adulthood which, as it should happen, runs parallel to when she created her new music. But, on a larger level, she says it more speaks to the way in which we should always be aiming to find out more about who we are as individuals as we do during that time period. “Everything stems from that growth,” Dunne says. At any age, she says, “You think you’re an adult and you know the world but you’re still constantly discovering more about yourself and the world you live in. I wanted to take that feeling and turn it into sound.” 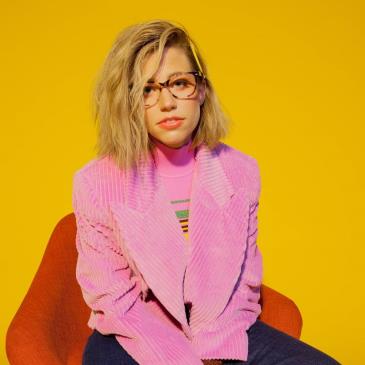