JVST SAY YES is widely praised for his clean and masterful productions, merging the energetic wall shaking world of bass music with the classic sounds of electro-house in what is known as bass house. Possessing an incredible resume of remixes as well as original tracks such as “Ill Behavior” and “Got the Love,” JVST SAY YES has been putting out hit after hit with no end in sight. JVST SAY YES’s recent release of Maximize EP on bass music icon Brillz’s record label TWONK showcases his expert ability to consistently put out heavy hitting tracks.

Astronaut has been a force to be reckoned ever since the boom of the dubstep and electro-house scene. Known for his heavy drops and precise productions, Astronaut has collaborated with bass titans Barely Alive and Black Tiger Sex Machine. Having seen releases on the far-reaching labels such as Monstercat and Disciple, Astronaut’s name is widely imprinted on bass bangers everywhere.

WAV3S will be providing an opening set, the  OC locals and future trapstars are planning to throw down a trap heavy set full of progressive drops.

With AVALON residents Munz and Haymakerr on call for support, be sure to bring your friends and let loose for an night of electro’s finest on the historic AVALON stage.

Combine the iconic Avalon Hollywood and a constantly evolving roster of boundary-pushing electronic acts and you've got the recipe for CONTROL LA. Born in 2008, the weekly phenomenon stands as the longest running nightlife party in the states and maintains its ground-breaking music programming by showcasing the strongest up-and-comers with festival headliner potential. Previous years have seen the likes of an early Skrillex, along with acts like young Zedd, Wolfgang Gartner, Porter Robinson and a pre-"Turn Down For What" DJ Snake all having graced the CONTROL stage, it's safe to say the Friday event is the premiere stop for DJ prodigies. CONTROL has sounds for everyone, diversifying its lineup with an array of hip-hop artists including Mystikal, Zaytoven, and DJ Premier. Each CONTROL LA lineup is invariably ahead of the curve and adds to the over 4,000 bands and DJs who have already performed at the renowned event. 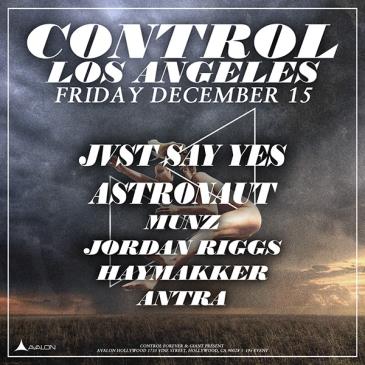