A Funky DJ and Electro Live Driven Hip, Fresh, Soul, Dance Music Journey that invites all to Where the Leaders Innovate, the Creative Propel and the Unique Dwell! Where the Underground swells and rises Above ground to refresh the scene with a brand new sound …

Come enjoy our new weekly eclectic and truly hot-electric, sensational musical experience that puts the Hip into Hip-Hop, Traps shake that sexy Body, Moves your Soul, Slaps with Funky Beats that get your feets on the Dance floor and your hands up in the air!

Pianist. Emcee. Producer. Bandleader. Sideman. Music historian. Kev Choice wears many hats, and all of them fit. Blessed with prodigious talent, plus the skill and dedication to his craft to pull it off, the Oakland-based artist is redefining what it means to be a musician in this day and age. Not too many classically-trained pianists who hold Master’s degrees in jazz can rock microphones with blazing-hot 16s.

Yet such versatility comes natural to Choice, whose diverse array of influences ranges from Prince to Rakim to A Tribe Called Quest to Stevie Wonder to McCoy Tyner to Chopin and Ravel.

“I grew up in the Hip-Hop era,” he explains. “I had love for Hip-Hop before I even knew what classical music really was.” Hip-Hop, he says, “was always the music that helped me express myself the most,” while “Classical music gave me a broader understanding and appreciation for music beyond Hip-Hop.”

Choice remembers being “heavily into vinyl” as a young child, which helped him to develop his ear for music. He began playing piano at age 11, and was soon recognized as a prodigy. As a teenager, Choice played in classical and jazz ensembles as part of the UC Berkeley Young Musicians Program, and continued his studies at Xavier University of Louisiana (New Orleans)–where he graduated with a (BM) in music– and Southern Illinois University (Carbondale)–where he graduated with a (MM) in music.

DJ YELIR
DJ Yelir (Real Name 'Riley' spelled backwards) is a San Francisco native, Musician and Music Producer who studied music since grade school. The founding member of the musical collective "Children Of The Funk (COF)", DJ Yelir continues to master and refine his poise, timing and seamless mixing skills. He is considered one of the best 'up and coming' talented deejays in the Bay Area Club scene!  DJ Yelir had DJ'ed and backed up prominent local artists such as Rec League, Richie Cunning and Dregs One just to name a few. His future projects include a collaborative LP with Bay Area reclusive musical genius "Bad Larry" titled "The People Vs Lawrence", an upcoming instrumental album of his exclusive productions entitled "TUO (The Unemployment Office)" and future releases of the COF collective.

Along with our residents we will have a few STAR friends pop in to HEADLINE a show or two ...  "We got too much soul, Rhythm and Blues R&B, ya see, all that’s cool / But hip-hop and rap, yeah, that’s where our heart at."

Don’t Sleep on this event!

DJ RasCue (aka EBF of Various Blends/Black Burgundy) is a veteran DJ and MC from the San Francisco-Bay Area. For 20 years-plus, RasCue has been a prominent and widely known deejay in California. RasCue was named "Best All-Around DJ" in San Francisco in 2000 by the SF Clubby Awards. One of the founding members of the legendary underground hip-hop group "Various Blends(w/ Solefather Rasco and Friz-B the Freethinker)", 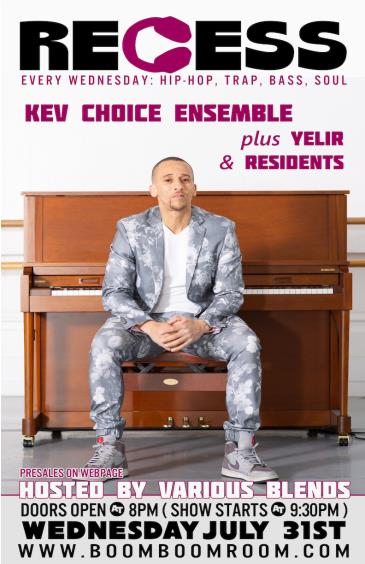