"Party Where the Rock Stars Do!"
With KINGDOM COLLAPSE, The Ocean Effect, Violence in Violet, & Arctic Origins!

Relevance. It is one of the most innate human desires. This is why Texas-based rock band,Kingdom Collapse, has carved out their spot in the rock world. The world first responded to a relevant theme of betrayal when their debut single, “Suffer,” amassed over 8,000,000 YouTube views and 1,200,000 Spotify streams organically. The group’s 2020 hit radio single, “Uprise,” broke into both the Billboard and Mediabase Top 40 Active Rock charts for 9 weeks and went on to become Sirius XM Octane’s #1 Most Played song for several weeks. The band’s follow-up radio single, “Unbreakable,” became a smash hit across the rock world, spending 12 consecutive weeks on SiriusXM Octane’s Top 15 Big Uns Countdown before landing at the #1 spot. Despite having been released for a matter of months, “Unbreakable” has generated over 4,000,000 Spotify streams to date, tipping the band’s total stream count over 9,000,000 combined. The group features Jonathan Norris on vocals, David Work on guitar, Aaron Smith on bass and Elijah Santucci on drums. Together, they have been showing the music industry what an independent band can truly achieve. In 2021, Kingdom Collapse partnered with big time manager, Larry Mazer (KISS, Breaking Benjamin, Lamb of God) as well as one of the leading booking agencies in the industry, Dynamic Talent International. The band has since played the Danny Wimmer Presents:Welcome To Rockville Festival in 2021, as well as several national tours across the entire country! Don't miss your opportunity to see them live and in person! 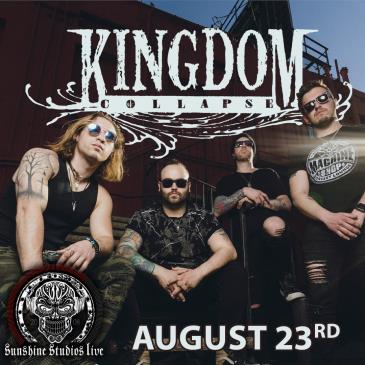