Processing...
395726
158365
Kevin Morby’s Indianapolis date at HI-FI has been cancelled.  Refunds are available at point of purchase. Online buyers will be refunded in 1-3 business days. Please direct any questions to boxoffice@mokbpresents.com.ou can follow our ongoing list of affected shows here: http://bit.ly/mokb-hifi-covid19updates
JOIN WAITLIST

Kevin Morby’s Indianapolis date at HI-FI has been cancelled.  Refunds are available at point of purchase. Online buyers will be refunded in 1-3 business days. Please direct any questions to boxoffice@mokbpresents.com.ou can follow our ongoing list of affected shows here: http://bit.ly/mokb-hifi-covid19updates

Singer/songwriter Kevin Morby broke out of the shadows into a fruitful solo career, penning songs that melded Dylan-esque lyrical mystique with rootsy production. Along with contemporaries like Angel Olsen and Kurt Vile, Morby represented a wave of sharp, indie-bred 2010s songwriters whose audiences grew exponentially as they came into their own. Morby's development was particularly quick, his vision taking shape in a string of well-received records that included 2017's pristine City Music.

Based in Los Angeles, Morby originally moved from his native Kansas City to Brooklyn in the mid-2000s, eventually joining the noise folk group Woods on bass. While living in Brooklyn, he became close friends and roommates with Cassie Ramone of the punk trio Vivian Girls, and the two formed a side project together called the Babies, who released albums in 2011 and 2012. Following his move to L.A., Morby recorded a collection of songs with Babies producer Rob Barbato that was intended to be an homage to New York City. The new songs represented a stylistic shift into a more roots-oriented indie sound and also featured Babies drummer Justin Sullivan along with several other guest artists. Released in 2013 by Woodsist Records, the eight-song collection was called Harlem River and became Morby's debut as a solo artist.

In August of that year, Morby relocated from his Brooklyn dwellings to Los Angeles, quickly beginning work on what would become his second solo album, Still Life. The album was released on the Woodsist label in late 2014. His next record was informed by two developments: he moved to a house with a piano, and he played in the Complete Last Waltz, a group formed to pay tribute to the music of the Band. The first changed the way he wrote songs; the second meant he hooked up with fellow bandmate Sam Cohen of Yellowbirds and the two began collaborating. The recording of Morby's first album for his new label, Dead Oceans, took place in Woodstock, New York and featured appearances from keyboardist Marco Benevento and Quilt's John Andrews on musical saw. Singing Saw was released in April of 2016. The following year, a companion-piece album, City Music, was released. Recorded at the analog-centric Panoramic House studio in rural West Marin, California and prominently featuring its 19th century pump organ, the album saw Morby channeling Lou Reed and Patti Smith in a collection of introspective vignettes. It would be two more years before he followed up with fifth album Oh My God. The sprawling double album was semi-conceptual, with each song centered around loose religious themes. Adding to the concept of the album, its arrangements were stripped down to just one or two instruments rather than the relatively saturated instrumentation of Morby's other albums.

Sam Cohen’s second solo LP, ​The Future’s Still Ringing In My Ears​, just might be a magical thing. An album blessed equally with melody, melancholy and depth. A richly psychedelic listening experience, immaculately produced, often the work of one man toiling away alone in his studio but sounding like a cast of many, chasing his dreams late into the night. A collection of songs that take stock of a maddening present and a potentially dark future, but delivered with heart, warmth and wit.

It’s also an album that might never have happened.

The words within ​The Future’s Still Ringing In My Ears are certainly direct, though hardly upbeat. “I’ve been writing about climate change and the decline of the west for a long time, and those issues have amplified to sort of a fever pitch. It’s on a lot people’s minds.”

The title itself is a statement on Cohen’s own state of mind. “It’s just always reverberating in my head,” he says. “What is our future? Is there a future?”

Becoming a parent put a fine point on his worldview. “For years I was like, ‘Alright, humans are killing the Earth -- we had a good run, but...party’s over, guys!’” he laughs. “It pains me more now. You can’t protect your kids from what’s to come.

“The only way to go on is to laugh at it a little, because the weight of it and the profundity of the problems can destroy you. What I want for this music is to connect with people struggling with these same thoughts and feelings. I want people to hear this and say, yes, this is all really heavy, and I also feel helpless, and we don’t have any good answers...but we have each other. And this music sounds really good! It’s all I can offer.”

Consider ​The Future’s Still Ringing In My Ears as a respite, then, a chance to laugh at the absurdity of it all, to revel in all the unlikely beauty that still surfaces amid the chaos and meaninglessness, a soundtrack to the apocalypse you’ll struggle not to whistle along to.

It’s an album Sam Cohen almost never made. You’ll be glad he did. 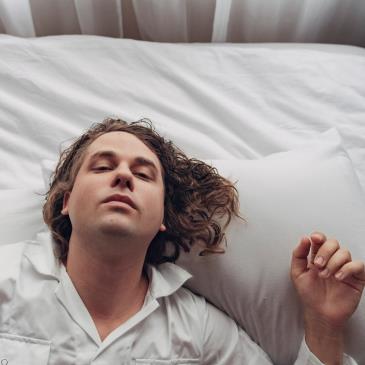