As King Krule, 18 year old south-east London based singer/ producer/ songwriter Archy Marshall has quietly and stealthily crafted a reputation for himself as one of the most raw and startling voices of a new generation. With his unexpectedly deep and mournful baritone tracing fissures of disappointment and social disorientation to devastating effect, Marshall has harnessed the inchoate frustration and fury of youth and translated it into a series of brilliant singles released on the likes of True Panther Sounds and Rinse over the past couple of years.

Now comes "6 Feet Beneath the Moon", his first full-length on XL Recordings/ True Panther Sounds, and with it, the much anticipated unveiling of the full scope and scale of Marshall's vision. Over the course of 14 tracks, Marshall's passions and confusions are rubbed raw and laid bare, the only connective tissue throughout it all being one of searing lyrical clarity paired with a confounding musical deftness which utterly belies his tender years. From the opening clarion call of "Easy, Easy" it is abundantly clear that this is a breathtakingly bold and arresting sonic worldview, as his songs, produced by Marshall along with Rodaidh McDonald (The XX, Savages), open up to become a loose knit meditation on regret and discontent, loss of faith and renewal of hope, and optimism in the face of desperation.

Eschewing much of his previously released material, "6 Feet Beneath the Moon" firmly yet soundly rejects any notion of contemporary trends or peers to occupy its very own unique place on the music landscape, oscillating gently between the classic 50s soul of Gene Vincent and Elvis Presley to the minimal, avant-garde experimentation of Penguin Café Orchestra, to even the electronic smog and dub textures of Marshall's beloved Rinse FM. This is a record where the nakedly bluesy stomp of the likes of "A Lizard State" and "Easy, Easy" sit effortlessly next to the low-end frequency and shimmering beats of "Neptune Estate" and "Will I Come", after all. It is reflective as much of Marshall's own eclectic tastes as it is of the frenetic pulse and rhythm of the city around him, particularly the rapidly changing south-east areas in which he grew up. There is a genuine grittiness and world weariness ingrained here, as exemplified so succinctly when Marshall sings, "Hate…runs through my blood" on the stunning "Out Getting Ribs", the track which started all the fuss.

All these esoteric textures and fidgety, off-kilter rhythms make perfect sense as an album however, especially when you consider that incredible voice. Whether he is singing ruefully of youthful disaffection and "the heat of my own treason" ("Ceiling") or spitting out venomous lines like "I'm not going to crack like you cracked…I don't want to be trapped in the black of your heart" over the jittery "A Lizard State", its clear that something which marks Marshall out is his stunning ability to turn intense emotional peaks and troughs into spectacular pieces of artful, atmospheric and anthemic balladeering.

Some of the imagery is disturbing to be sure (as on the closer "Bathed in Grey" where he offhandedly murmurs that he "there was blood…found a body in the dark") but the songs are also imbued with genuine heart as well. Taken as a whole, "6 Feet Beneath the Moon" is the sound of a young man growing up - not for nothing is this album being released, unconventionally enough, on Saturday, which also marks Marshall's 19th birthday - and attempting to grapple with the realities of the world he inhabits, an unsparing dissection of the social decay that has begun to set in around him - and a fascinating, brutal journey it is too. 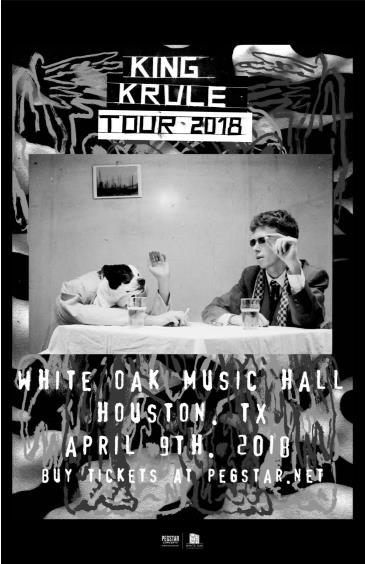