The new Delta variant is active in the Bay Area. Out of an abundance of caution and for the continued safety of our guests, staff and musicians, we will now require Proof of Full Vaccination, or a Negative Covid Test taken 48 hours or less prior to the show. HopMonk and Twin Oaks Staff will be held to the same standards.

Proof of vaccination can be your original paper vaccine card, a photo of the card, the California digital vaccine QR code, or the CLEAR Health Pass app.

Both the QR code and CLEAR health pass make it quick and easy to register and will help speed up entry at the venue.

More info can be found here:

As has been mandated by Sonoma and Marin Counties Health, you will also be required to wear a mask indoors, even though you are vaccinated.

We appreciate you showing up a bit early to help with line flow.

Thanks in advance for your cooperation. Let’s work together to keep LIVE MUSIC ALIVE.

This too shall pass!!

Frontman Billy Kingsborough and lead guitarist Alex Leach of San Francisco’s Kingsborough are determined to connect with audiences both on record and on stage. Influenced by the sounds and songwriting of The Beatles, The Black Keys, and Led Zeppelin, Kingsborough form a bond with fans by unleashing a brand of potent rock n’ roll that No Depression calls “laced with a vintage elegance that appeals to an ever-changing audience.”

Kingsborough match the radio success of 1544 with an equally compelling live show. With lead singer Kingsborough projecting what The Bay Bridged describes as “the animation of a live wire,” the rest of the band more than hold their own on stage via heavy grooves, classic riffs, and soaring solos.

According to Leach, Kingsborough views each live performance as an opportunity to break down the walls that often separate artists and audiences:

“On stage, we try to recreate the energy and emotion that inspired the songs, all with the hope that we can connect with people. We want our shows to be a conversation with our audience, a back and forth flow of energy. If we can allow them to escape for a few hours, we feel good about what we’ve done.”

This purposeful plan of action for the stage has paid great dividends: Kingsborough’s infectious live energy has earned them opening slots for Dorothy, Joan Jett, Robert Cray, and ZZ Top.

Never ones to tolerate complacency, the band are now prepared to take Kingsborough to new places. Kingsborough’s latest EP “Take The Ride” is an EP that Leach calls “evidence of our sonic evolution.” Even though their 2020 tour of Europe was cut off short due to pandemic, plans are in place to return in early 2022. All the while, Kingsborough intend to soak up new inspirations and influences by collaborating with some of the Bay Area’s most accomplished musicians.

Kingsborough and Leach are eager to embrace the bliss and the blues that come from running headfirst into the unknown. They are, however, most excited about the countless new faces and stories that await them on their journey. 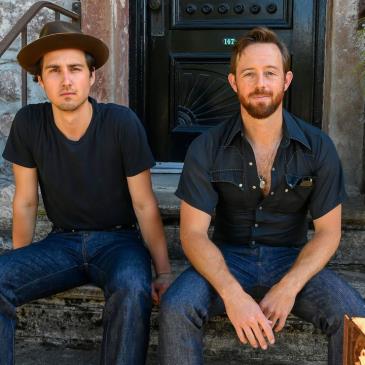