Rain or shine. 21and over show. ID required.

Doors at 6:00pm
Outside At Slowdown
$35 General Admission
$75 VIP includes priority viewing area at front of stage and dedicated bar.

Some artists break one or two rules. Koe Wetzel breaks pretty much all of them.

The Texas-born singer, songwriter, guitarist, and producer kicks out hard rock hooks with a twang bred in rough and tumble dives, yet meant for stadium stages. For as much as he unapologetically trailblazes between grunge, country, Americana, and damn near everything else under the sun, this maverick broke through the old-fashioned way—he busted his ass. Since 2015, he has quietly sold over 200,000 units independently, cranked out 100 million streams and views, and went from playing bars with chicken wire in front of the stage to hosting and headlining his own packed-to-the-gills Koe Wetzel’s Incredible Music Festival surrounded by fireworks and thousands of screaming fans.

On his third album and debut for Columbia Records, Koe continues to set the rulebook on fire by simply being himself…

“We live what we write, man,” he exclaims. “I don’t make anything up. Everything I’m singing is true. Authenticity is the most important thing to me. All of the music is me.”

He began “living” music as a kid. Hailing from Pittsburg, TX, he accompanied mom as she performed on the Opry circuit. As they went town-to-town, he watched his mother belt out country classics from the side of the stage. Grandpa introduced him to Creedence Clearwater Revival. Meanwhile, dad bumped hip-hop gems from The Notorious B.I.G., Tupac, and 50 Cent. In addition to listening to Garth Brooks, Johnny Cash, George Jones, and Willie Nelson, he developed a passion for alternative rock. In eighth grade, a cousin shared an iPod playlist and opened Koe’s eyes to Smashing Pumpkins, Soundgarden, and Nirvana. “I turned into a rock head,” he smiles.

He dusted off an old guitar received as a Christmas gift after a key realization. “I figured out you could get girls easier,” he recalls. In between performing, he played football as a linebacker for his high school and eventually Tarleton State University. Even with the 5am practices, he spent all night writing, jamming, and recording. After an ankle injury and subsequent six month-hiatus, he dropped out of college in sophomore year and went all-in for his career. Within eighteen months of throwing down four-nights-a-week around Texas and Oklahoma, shows began to sellout. Koe’s 2017 debut Noise Complaint became a phenomenon powered by “February 28, 2016” [19.2 million Spotify streams], “Something To Talk About” [15 million Spotify streams], “Love” [12.9 million Spotify streams], “Fuss & Fight” [11.9 million Spotify streams], and more.

Mind you, he managed to pull this off without a label, agent, or traditional structure to speak of.

“We did everything on our own,” he goes on. “We also like to get drunk and have a good time, so me getting arrested a couple of times probably helped out a bit,” he laughs.

The momentum continued with 2019’s Harold Saul High and its singles “Ragweed” and “Forever” as more sold-out shows ensued. Following a tireless grind, he surprise-released the 2020 anthem “Kuntry & Wistern,” which exploded right out of the gate trending on Apple Music and garnering praise from The Boot who wrote “Wetzel has earned a reputation as one of the Lone Star State’s most high-energy and engaging performers.” Soon after, Koe inked a deal with Columbia Records.

As usual, he pulls no punches with the hook, “I think I’ve lost my fuckin’ mind, at least that’s what you told me,” over a palm-muted clean guitar.

“I’ve always listened to a big variety of artists, and that inspires me to this day,” he continues. “I might be crafting lyrics in a hip-hop sense, chords in a rock sense, and melodies in a country way. All of those elements combine within the process of making music.”

That inimitable style shines on the single “Sundy or Mundy.” A bass groan gives way to vivid verses before the chorus climbs over a wall of distortion and a guitar lead rings out.

“It’s about losing your mind,” he explains. “When you’re sitting there in the studio, you can forget what day it is. It was written from the same perspective. You get delirious and numb to the whole situation. It’s got a gritty and heavy sound, but the choruses go down smooth and steady.”

As he smashes more rules, Koe Wetzel emerges as the outlaw the 21st century needed all along.

“Whatever you’re going through, I want to help you go through it,” he leaves off. “I know I’m not the only one who feels the way I do. I hope maybe this helps you build a better life. When I’m onstage, it’s carefree. There’s not a worry in the world. I don’t think about my troubles or what’s going on in my life. It’s just about the music and the fans. You don’t need anything else. 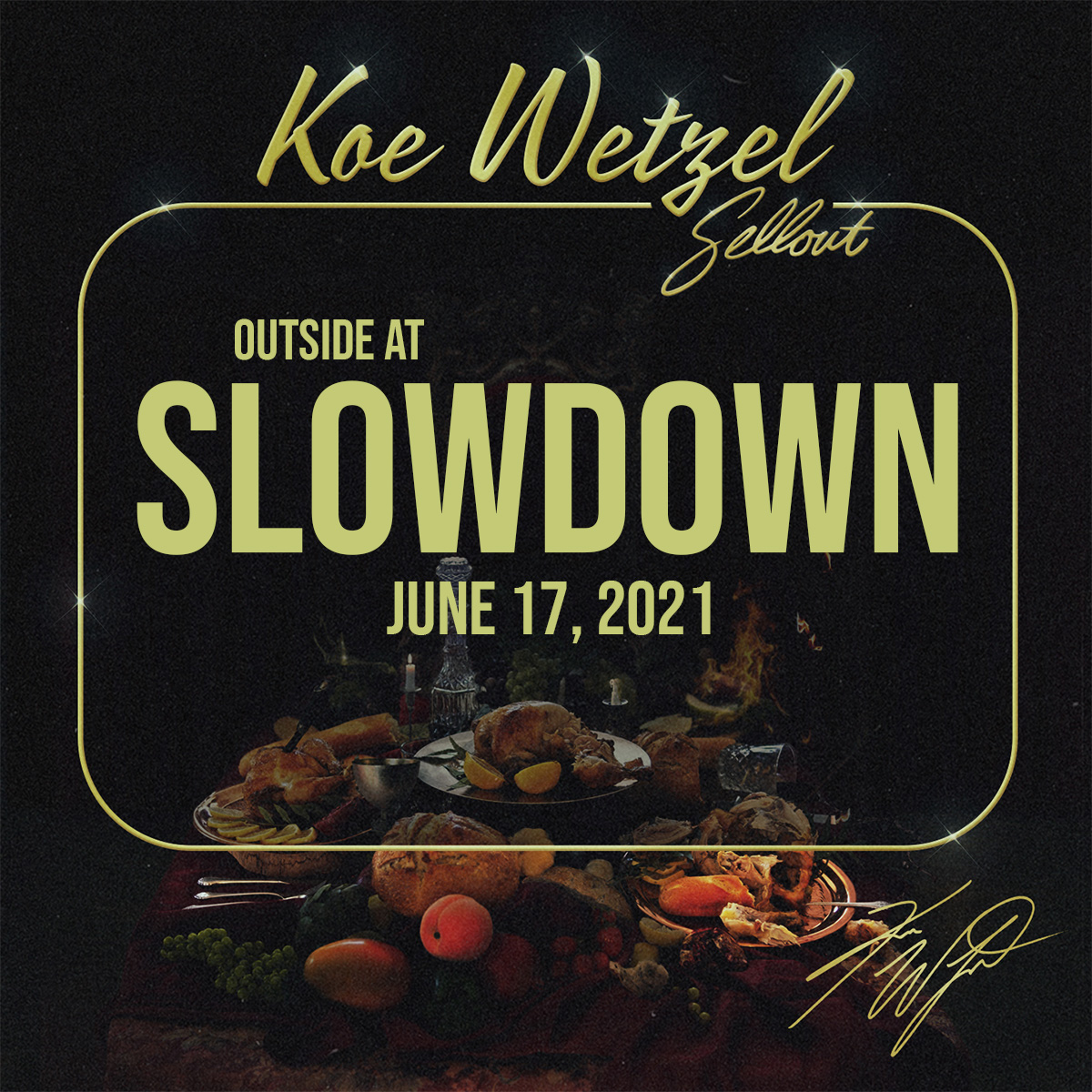