Kristen is an indie-alternative/rock band out of Indianapolis, Indiana fronted by Kristen Bales. With a voice that at times appears relaxed and pristine, like the sweet crooning of Norah Jones, but at times crashes against the heavy, soul-filled tones of Janis Joplin, Kristen turns to roots of jazz to exemplify genres of blues, rock, and soul. In the spring of 2015 Kristen spent four months in Nashville, Tennessee recording, writing, and cultivating her live show at the Contemporary Music Center. The brief season culminated with a national tour, nearly six studio recordings, and over 20 local shows. Nashville left traces of an entirely new sound—roaring guitars, haunting vocals, and resounding melodies. This next year brings new faces and fresh beginnings for the band as Kristen takes to the road to promote the release of the upcoming single “Therapy”. A groovy, vintage track that captures Kristen’s brief experience in Nashville, TN and her consequential move back home, “Therapy” rings in the New Year with a long overdue metamorphosis of the old folk band, into a new era for Kristen.

About Mina & The Wondrous Flying Machine

Mina & the Wondrous Flying Machine are a piano-driven cross-pollination of singer-songwriter, indie rock and a hint of jazz using lush chords and impulsive horn lines to create their distinctive sound. Their songs have been described as “if Joni Mitchell and Aimee Mann had a baby with Charles Mingus.” Live shows have emphasized variety and spontaneity, from didgeridoos to impromptu rappers to homemade megaphones and banging on alarm bells. The Wondrous Flying Machine try to be as adventurous and honest as they can, but most of all grateful to be making music wherever they may go. Founder Mina Keohane was forming ripples in the Indianapolis music scene as a jazz composer with her group making stops at Indy Jazz Fest and landing the cover of Intake Magazine, a feature in Nuvo and Indy Men’s Magazine. Deciding to take a break from instrumental music and going back to her roots as a singer, Mina put together the Wondrous Flying Machine as the vehicle for a new adventure in songwriting.

From her childhood in Lexington, MA to adulthood in Nashville, TN, Elisabeth Beckwitt has battled anxiety, depression, and addiction. She’s always felt that it’s important to be open and honest about her struggles so that she can encourage others to reach out and seek the help that they might need. Elisabeth pairs her clear, powerful voice with an unapologetically supportive attitude towards her tribe and weaves them together into relatable stories with encapsulating melodies that build an intimate connection with her audience. With her debut EP ’Gray Again” released in 2018 Elisabeth confronted her demons so we could all feel a little more comfortable talking about our own. With her latest EP, “Indigo," Beckwitt is showing us the kind of life we can expect to find on the other side of recovery. Catch the single “Free Fall” on Nashville's local independent radio station Lightning 100, and stream “Indigo” through Spotify’s “Out Now” Pride Playlist. When Eastside's Pansexual Queen isn’t hosting her monthly showcase, Sad Girl Night, you can catch Elisabeth playing shows locally in Nashville and touring regionally throughout 2019 to promote her upcoming releases, including new dark pop angry anthems, "Lovely" and "Think You Are."

With both a fiery passion and a cool composure, Emma Peridot is driven to create music that will capture the hearts of masses, all the while remaining unapologetic about who she is. Her sound is pop with elements of EDM and R&B, and her lyrical content can be both mature and poetic or straightforward and playful. As a young, queer pop artist, Peridot is an embodiment of self-assurance. Her purpose in making music is to create a ripple effect of that self-assurance, and to bring diverse groups together over a common love of music. 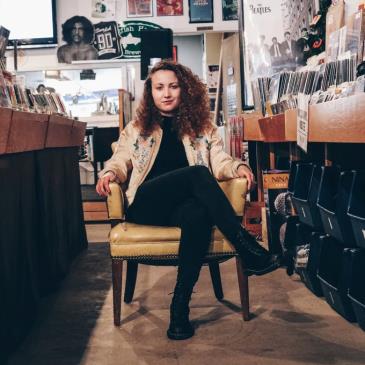