On July 6th, Avalon Hollywood presents a night filled with bass, trap, and dubstep, with performances by LAXX, and special guest BAILO with support from Chainlynx, Matphilly, SJXN on this edition of CONTROL Friday’s.

CONTROL Fridays at the Avalon are known for their filthy bass, and headliner LAXX is bringing just that. This Oxford native has made his way through UK and Europe for his award-winning music. His sound transcends typical dance music and provides a seriously fresh new vibe. After signing with Never Say Die Records in 2014, his career has taken off, and he has produced multiple EPs. His latest 12-track EP “Fake Friends” is high energy and full of heavy trap with futuristic themes throughout. His sound has a perfect balance of premonition of excitement, impossible not to dance to.

Our special guest this evening was born in Brooklyn but raised in Queens, New York’s own BAILO. Gennaro Bailo has been one of the rising stars in dance music and he most recently joined Yellow Claw’s infamous label Barong Family. On an onslaught of releases of late, he collaborated with YDG, Gladez, and more on his ‘The Relapse’ EP that came off Barong Family just a couple of months ago. Be sure to witness the energy and wildness of BAILO this Friday at CONTROL.

Joining him is the dubstep duo Chainlynx, from San Diego, California. They have opened for artists like 12th Planet and Crizzly, during their residency at Bassmnt Nightclub, one of the most popular clubs in San Diego. Their music is hard hitting and energized, creating a unique sound.

DJ and Producer Matphilly’s music spans multiple genres from Moombahton, to Electro House, to Drum & Bass, and Dubstep. Born here in LA, matphilly has made his mark on the EDM scene with multiple club residencies, and has shared the stage with the likes of Getter and Whiskey Pete. He is a forced to be reckoned with and definitely one to watch.

SJXN, made up of Sniper Jones and Nadicimo, are best known for their high-energy Techno-Electro music, and have even dabbled in mixing Moombahton into their repertoire.

With LAXX set to headline Avalon and special guest BAILO to come along with him, you will not want to miss the epic sets to go down Friday, July 6th with support from Chainlynx, matphilly, SJXN on another masterful edition of CONTROL Fridays’. 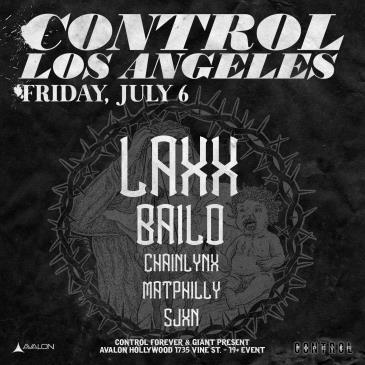