The month of April is special, and we want you to celebrate with us. April is most notable for Jazz Music Appreciation month, so let’s get ready to be “Almatized”. The one and only Lady Alma will be accompanied by Philly’s own Vertical Current performing high energy Jazz-fusion from her select catalogue. Vertical Current is an extraordinary international award-winning band with a history of complimenting Philadelphia’s musical royalty, such as The Roots, Jazmine Sullivan, John Legend, and Jill Scott. Lady Alma believes in connecting diverse communities as her music touches people from all over the world. Lady Alma and Vertical Current will personally demonstrate their musical ability to intersect genres to uplift and inspire. Join us as we celebrate Black music in one of the most creative cities in the nation. Philadelphia stand up! As we give you Brotherly love and Sisterly affection in performance! A portion of proceeds from ticket sales will support The Women’s Coalition for Empowerment, Inc. a local nonprofit dedicated to supporting BIPOC artists and preserving Black music.

International singer and songwriter, LADY ALMA, is bringing her soaring, searing vocals back to eager audiences who desire her in comparable funk-house-soul stylings. From her dynamic live shows that left critics and fans alike breathless across the globe for two decades, to the recent revival of her hit single produced by The Rainmakers entitled “Let It Fall”, LADY ALMA continues to be a widely praised source of true sonic satisfaction since her introduction.

Born in San Diego, and raised in Philadelphia, LADY ALMA began her entry into the house music scene recording club anthems helmed by the likes of super-producers Yukihiro Fukutomi, Masters at Work, Fanatix, 4Hero,and fellow Philly mainstay King Britt, where she was featured on his legendary album When the Funk Hits the Fan. She has worked with Mark de Clive-Lowe – fan favorite songs include “Keep It Movin’”, “Believe”, “Hold Your Head Up” and their infectious 2010 cover of Michael Jackson’s “I Can’t Help It”.  In 2014, she released her single “It’s House Music”, produced by Osunlade, on Yoruba Records, which is still considered a fan-favorite world-wide. In 2017, her single “Peace You’ll Find” was released on Reel soul Musik, produced by Will “Reel soul” Rodriguez.

Her track “Let It Fall”, made a resurgence in 2018 when the song went viral via Facebook with over 20 million views (video of a fan seen dancing and lip-syncing to the song in Johannesburg, Gauteng South Africa). Not long after, another video of legendary choreographer Toni Basil, dancing to “It’s House Music”, went viral with over 5 million views on Twitter, and was also seen on Inside Edition. The demand for LADY ALMA’s infectious groove went off the charts. Her single “Glory & Honor” (produced by Darryl James) was released in March 2018, and quickly followed by “A Time And A Place” with producer/DJ Ralf GUM, which was released in June 2018 on GOGO Music. Also in 2018, LADY ALMA was recognized by Trax source as “Best of 2018” including: “2Top 10s”, “16 Top 100 spins” and “60 features in DJ Top 10 Charts” to name a few.

In 2020 LADY ALMA featured on "Landlord" by Swift Technique, which was released on Swift Technique's indie label. She also released a compilation of remixes of her track “Make You Move” featuring renowned DJs including: Terry Hunter, Mark Francis, DJ Shannon & Lil Dave on T Box’s Records.

And despite the impacts of the global pandemic in 2020,Lady Alma’s shine refused to be dimmed. Alma released a new track “Breathe” produced by South Africa’s own DJ Miza featuring Chris Stevens, along with a remix of her Tracksource #1 hit-single “Your Time to Shine” (Wipe The Needle Remix) produced by Lee Gomez. She also pioneered a virtual concert series with guests Vertical Current and Rich Medina at World Cafe Live that brought music and life to many in a year that lacked live performances. Lady Alma also recorded “Livin’ for the Groove” & “Hallelujah” Produced by DJ Marley Marl, which hit radio and streaming waves nationally and internationally.

Recently, LADY ALMA was recognized as one of the contributors in music by the City of Philadelphia’s Resolution in naming June "African American Music Appreciation Month” this is a follow-up to her being honored with a Proclamation by the City of Philadelphia in 2018.  In 2022, LADY ALMA will resume her residency at World Cafe Live and is planning a release for her newest EP project via Box Records later in the year.

Whether you’re in Toronto, Japan, Berlin, London, Paris, Johannesburg, or major cities across the US, LADY ALMA’s music is revered by many fans and DJs alike. As quoted by legendary DJ/Producer DJ Jazzy Jeff, “Oh my God...if you’re looking for some true soulful emotion, movin’ vocals...here you go...she makes me wanna throw my hands in the air & party the nite away... that’s Philly soul for ya!"

Vertical Current is a band on the rise, a name on the lips of music lovers in one of the greatest musical cities in America, Philadelphia. The band was started in 2009 by local trumpeter and composer Christopher Michael Stevens, while pursuing a music degree from Temple University. Since then, Vertical Current has become the go to band for visiting artists from the likes of Grammy Award winners Chrisette Michele and Kelly Price to the awe-inspiring Frank McComb. Additionally, the band has opened for a number of notable artists including The Robert Glasper Experiment, Raheem DeVaughn, and Eric Roberson to name a few.

Individually, the members of Vertical Current have traveled throughout the world, performing and recording with an array of celebrated and award winning artists including Roberta Flack, John Legend, Jazmine Sullivan, Jill Scott, The Roots, Lady Alma and more.  It’s no surprise that their interaction with such amazing artists and composers has further kindled Vertical Current’s passion to create and perform at the highest level.

VC’s brand of music is a unique blend of genres that is intended to uplift and inspire. Strong melodies and funky rhythms are characteristic of their classic style. The band currently has 4 albums available.  aRe (2011), Bright Side Of Midnight (2014), and After Midnight (2017) showcase the many ways Vertical Current gets down. The fourth installment, The Future Is Bright (2018), is truly some of their best work!! That being said, the best way to experience the music of Vertical Current is in person. Their electrifying performances will leave you feeling truly inspired! 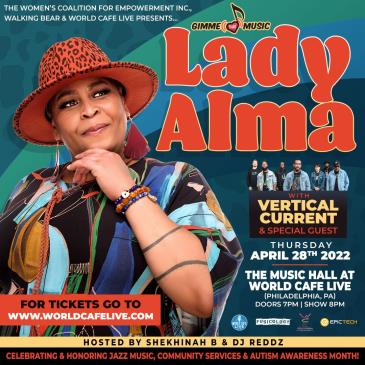