Lagos Roots, a 17-piece afrobeat ensemble that brings it back to the root: straight to 1970’s West Africa. Led by Geoffrey Omadhebo (Sonny Okosuns, OJ Ekemode), LAGOS ROOTS is steeped in unfiltered, deeply-grooved and intense Nigerian Afrobeat – horn-blasted tribal funk rhythms that keep you moving (and sweating) to the music of the Kalakuta Republic.

What do you get when you put together world-class musicians with resumes that include playing/recording in such historic and seminal Nigerian afrobeat and highlife acts as Fela Anikulapo Kuti and Afrika 70, Sonny Okosun, Koola Lobitos, and Segun Bucknor, among others? You get Lagos Roots!

Each member of Lagos Roots is a seasoned artist with reputations worthy of individual praise. And together, they are receiving it, capturing the hearts of world music and funky breakbeat lovers with their ability to draw out an authentic and infectious afrobeat sound.

Recalling some of the artists with whom members of Lagos Roots have recorded or shared the stage, reads like a "who's who" in music: Bob Marley & The Wailers, Paul McCartney & Wings, Jimmy Cliff, Ginger Baker of Cream, Peter Tosh, Toots & the Maytals, Eddy Grant, and many more.

Emerging from a long held dream to put together a band containing original master musicians and members of a new generation of afrobeat musicians, Lagos Roots Afrobeat Ensemble represents an important step in the evolution of the style of Nigerian afrobeat once imagined by Fela Kuti & the Afrika 70.

Look for performances in the San Francisco Bay Area, and regional shows along the West Coast. We will announce more information about upcoming album release as it becomes available.

Elektric Voodoo is a "World Beat Rock & Roll" band from San Diego, CA that blends classic afrobeat, Latin, rock & roll, psych, jazz, blues and many other influences into its own unique genre that tastefully straddles the line between modern and vintage.

The band started when Scott Tournet (founding member of Grace Potter & The Nocturnals) started writing new material after leaving the Nocturnals. "Musically I wanted to try something a little different than what I'd done before. I wanted to make music with an undeniable rhythmic pulse but I really didn't want to make computer driven dance music as these past few years that seems to be much of what I hear." To accomplish that, Tournet tapped into the rhythms of West Africa, Latin America, and World music for inspiration. What came out the other side though was not just a world music project.

Tournet's old band, The Nocturnals, had a quite a successful career which saw them write, record, and perform with The Allman Brothers, Billy Gibbons (ZZ Top), Taj Mahal, Dan Auerbach (The Black Keys), Robert Plant (Led Zeppelin), Mavis Staples, Bob Weir (Grateful Dead), and many more. Through these experiences Tournet became schooled in song craft, soul, pop, blues, and classic rock & roll. So when he began writing songs to go on top of these powerful world rhythms the influences from his past shone through. What the listener is left with is a very unique sound that while immediately is very danceable, also offers innovation, song craft, and melody. Elektric Voodoo is a band that can excite and exhaust a Saturday night audience while also engaging and challenging more focused listeners.

Elektric Voodoo formed in 2016 and released their debut album later that year, which was met with incredibly positive critical reactions. Glide Magazine described that album by saying, "tastes of The Flaming Lips, Santana, Fela Kuti, Tame Impala and The Arcade Fire break through atop this soulful collection of songs that are birthed with unlimited potential," while Grateful Web wrote, that "by drawing from a variety of rich musical traditions, they have crafted a cohesive album that blurs the lines between genres and eludes classification."

Since releasing their debut album in 2016, Elektric Voodoo has toured throughout the U.S. and has shared the stage with a wide variety of artists including Anders Osborne, Karl Denson's Tiny Universe, Songhoy Blues, Con Brio, Easy Star All Stars, Five Alarm Funk, The Fabulous Thunderbirds, The Brothers Comatose, Orgone, and more. They’re releasing their second studio album in Fall 2018, and will be doing a national tour around that time. 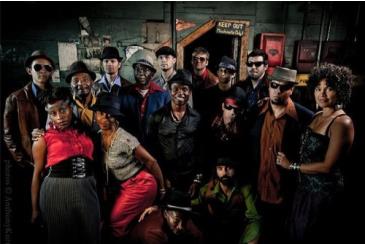