was recorded over two sold-out shows in Brooklyn, NY in Fall

the band’s 2017 album Eghass Malan. Writing about the shows

for The New Yorker, music critic Amanda Petrusich writes: “The

music is mesmeric, almost prayer-like, which can leave an

audience agog... whatever rhythm does to a human body—it

in Illighadad, Niger in 2016 by solo guitarist Fatou Seidi Ghali

joined by Amaria Hamadalher, a fixture on the Agadez guitar

scene, and Abdoulaye Madassane, rhythm guitarist and a son of

and desert guitar. The result is a groundbreaking new direction

their village. In the past years, the band has toured nonstop,

bringing their highly specific sound to distant corners of the 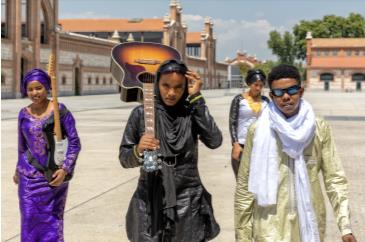