If you'd like to make a reservation to secure your table, please visit: https://themintla.com/dinner-reservation/Black Rock Candy
Black Rock Candy is a rock band from Southern California that boast an incredible eclectic sound of rock, classic rock, blues, alternative and pop with their original music. Lead singer, Taylor Jennings, will captivate you with her incredible vocal abilities, mirrored by Isabella Jennings’ colorful guitar riffs and solos. Aaron Ormond will have you on your feet with his high-energy drum ensembles. Samantha Yanis’ keyboard feel-good vibes and Grace Watkins’ hypnotic upbeat bass sounds transcends their love for music. Their musical talent has afforded them the opportunity to perform at legendary venues, wineries, clubs, breweries, charity events and festivals throughout California and Arizona, including, the Riverside Festival of Lights, Orange County Fair, Lake Havasu WinterFest, several Temecula wineries and the Whisky A Go Go in Hollywood, CA.

When Jonathan and Michael were college roommates, they stayed up all night playing music. Their neighbors weren't cool with it, but you're probably cooler than they were.
With Tim (from LA band Angelou) bringing the drum virtuosity, The Late Nights brings the classic piano rock sound for the modern age. Influences? Mysterious bars, lonely street lamps, smokey jazz clubs, and the sound of birds chirping under a sunrise when you suddenly realize you've been up all night. Oh, and Billy Joel.
Fresh and unmistakably original, The Late Nights invites you to rock from dusk to dawn.
www.thelatenights.com
IG: @the.late.nights
FB: @thelatenightsbandofficial
Ryan Bale
Ryan Bale is an alternative rock artist, based out of Los Angeles, who is influenced by artists such as Queens of the Stone Age, Young the Giant, Nine Inch Nails, Tool, Foo Fighters, and Royal Blood.  He strives to find the balance between modern and vintage, heavy and melodic. His debut EP is available everywhere June 11.
https://www.ryanbale.com/music
https://www.instagram.com/ryanbalemusic/
https://www.facebook.com/ryanbalemusician/

MBF’s song “Follow Me to the Sun”was hailed as the #1 song of 2019 and “Thank the Academy” as the #4 song of2020 by Goldmine Music Magazine and have recorded at Abbey Road, UK and CapitolRecords, Hollywood. MBF is comprised of Mindy Milburn, an incredible leadsinger who taunts with an amazing & wicked stage performance; LauraEspinoza, guitarist & songwriter who has performed with members ofForeigner, Train, Missing Persons & Berlin; Enrique Garcia, a guitaristvirtuoso with a Masters of Music from CSUN & Michaela Metivier, aclassically trained soprano with a Bachelors of Music Degree also from CSUN.

Dizzy Box Nine
If reviewers such as Hollywood Digest, Dancing About Architecture, Indie Pulse Music, Woke Chimp, and Vents Magazine provide any indication, the Southern California rock group Dizzy Box Nine uses elements of “innate intuition” to create “amphetamine-fueled” music that is “invigorating and moving” and blends “West Coast punk/rock charm” with “80s new wave,” “pop-punk,” and “alt-rock” stylistics, creating “authentic” music that is “warm like the Venice Beach sidewalks” which at times creates a “Svengali-like hold on the listener.” Dizzy Box Nine has been compared to bands such as the
Cars, the Police, Green Day, Jimmy Eat World, Tom Petty, RHCP, and MXPX.
And yet, Dizzy Box Nine has created its own signature sound that is unique and stands on its own, and their songs have been described as “catchy,” “well- written,” and “memorable.”
The band was created in the summer of 2016 by singer-guitarist Randy Ludwig, and features guitarist Tony Robles and drummer Amos Przekaza. “I like making music that feels good to listen to, but I also want to challenge the listener at the same time,” Randy says. 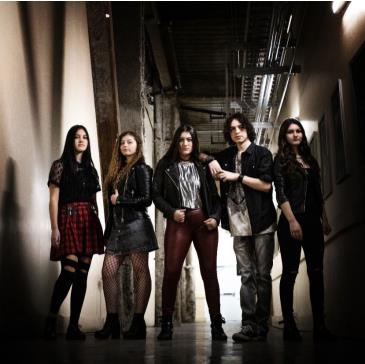