The Devil’s Attic haunted house is becoming a beacon of fear in the Louisville area. As the story goes, since the dawn of time the Devil has been collecting evil souls….souls that have brought terror to us all. The Attic is where he has chosen to keep them locked away for centuries. They have been waiting…..waiting to unleash their hellish fury! Go prepared to face pure evil as they welcome you……to The Devils Attic!

The Devils Attic haunted house is a collection of the true elements that make up many classic horror films. They have taken these elements and integrated them into a VERY interactive and detailed environment within the walls of this haunted attraction. Within the realms of The Devils Attic you will encounter many of your childhood demons as well as a slight horrific twist on some of the classic monsters of Hallows Eve. The result of many years of planning and passion is sure to frighten even the bravest of souls.

Can you withstand the terror of The Devils Attic?

Grim Trails is a haunted attraction based off of medieval legends and twisted fairy tales, full of mood, atmosphere and detail. It is an interesting twist on the stories we all grew up listening to at bedtime. This Haunted Attraction weaves you through a dark forest, over bridges and past waterfalls. You will be surrounded by mythical creatures, giant spiders, fire breathing dragons and more. The owners of the event have over 30 years of haunting experience.

The 7th Street Haunt is an award winning haunted attraction and one of the BIGGEST haunted houses in Kentucky. With its old school approach to scaring, the 7th Street Haunt is revitalizing what it truly means to be frightened. It features 2 different haunted houses under 1 roof. One you can experience the “old School” thrills of Ft Harmony’s Revenge and the other is crammed full of “high tech” props and animatronic chills called The Experiment. Your ticket grants you access to one of these haunted houses. During your visit, you can upgrade to include both haunts!

Asylum Haunted Scream Park is a Halloween theme park in the Louisville area. For the last several years the Asylum Haunted Scream Park has been one of the best haunts in the Ville. For 2016, Asylum has a two story arena to host Xterminate and with the latest high-tech laser rifle technology so the monsters will register hits when you shoot them. An expanded and more interactive story has been created for the theatrical, interactive Zombie City to take guests into a whole new realm of insanity where not all guests are guaranteed to survive, and the three quarter mile hike through Darkness Falls on Asylum will introduce a legion of new ghosts and ghouls, many which have never been seen before. Guests will also be treated to a full circus sideshow of fire-breathers, acrobats etc while waiting in line.  In addition, once onsite, you can also upgrade and add their latest attraction "Zombie Hunting" to your ticket, where you get on their military bus loaded up with (paintball) guns and drive through their urban city, and shoot zombies in the wild.

The Danger Run is a haunted house scavenger hunt game in Louisville. It is a one of a kind event that exists no where else in the world, right here in Louisville! It is a game played in the car with your friends. Go to one of their three starting locations located in the Metro Louisville area, or you can start online right from your house, and you will get a book of rhyming clues that you solve to find your way to haunted houses (included with your admission!). It’s unlike anything you’ve ever experienced. This year, the Danger Run features FOUR different haunted houses, 2 included with each adventure. You can choose to be surprised by which haunts you'll experience OR NEW FOR 2016! you can choose which haunts you'd like to experience! It's the most customized Halloween haunted adventure EVER!

Not only do you get the game and haunts included with your admission, but Danger Run also gives you free food offer from DQ Grill & Chill, free vampire fangs, and if you have 4 or more people in your car you will also get $10 gas from Speedway. It’s an entire night of fun Halloween adventure and the best deal in town. PLUS, if you are one of the TOP 25 groups to come closest to the exact mileage then you will be invited back to an exclusive Danger Run Finals Party where you will compete for HUGE prizes.

Danger Run...The Most Fun You’ll EVER Have In Your Car!

Celebrating 15 years of haunting the little town of Seymour, IN, a little over an hours’ drive from Louisville or Indianapolis, Fear Fair is a nationally recognized A + haunted attraction unlike anything you’ve ever seen. The owner of this massive attraction, located inside an old Air Force base, works on his attraction 365 days a year to bring guests the most detailed haunt that exists anywhere. In 2015, Fear Fair saw its biggest renovation to date, tearing down all the movie scenes from the popular Fear Fair Film Festival section of the haunt and creating a completely original theme that includes swamps, military and unspeakable creatures. For months, the Fear Fair crew has been building a real above ground cemetery of brick and mortar that will twist and turn through indoor and outdoor sections. Fear Fair’s infamous “Walking Dead” scene included over 6,000 square feet of Downtown Atlanta, and in 2014 it added the prison! In 2013, a whole area devoted to the terrifying video game world of “Silent Hill” was added! Fear Fair is a haunt you shouldn’t miss! Drive a little, scream a lot at Fear Fair – Indiana’s Scariest Haunted House. 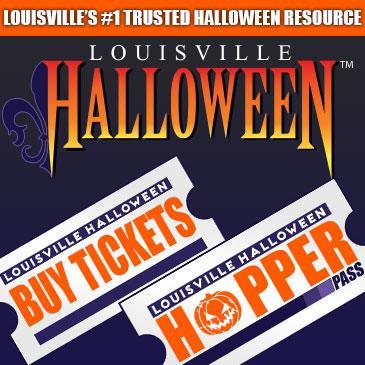