The globally distinguished and talented music producer and DJ, MOTi, is bringing his musical expertise all the way from Amsterdam to West Hollywood on Saturday, October 13th at the Avalon with support from seasoned DJs A-CRUZ, K4SH, and Fluencee.

MOTi is a world renowned artist who has produced hits for multi-platinum artists such as Ty Dolla $ign & Wizkid and worked alongside legends like Tiësto, Major Lazer & Martin Garrix. Due to his profound abilities, he has been able to produce many club hits including the fan-favorites “Virus” and “Boom”. However his multifaceted style has also been shown through his successful remixes for artists such as P!nk, Major Lazer & Dj Snake, and Flo Rida, among others. His talents aren’t solely limited to the studio for he has had multiple outstanding sets for the likes of Ultra Music Festival Miami, Tomorrowland (Belgium and Brazil), Electric Daisy Carnival (Las Vegas, NV US), EZOO (New York, NY US), amongst many others.

Known for his heavy bass and cross-genre mixes, the local gem, A-Cruz, will be one of the opening acts for the night. In addition to his musical work and talent, A-Cruz runs an International Radio Show, !FOXHOUND!, known to air some of the most acclaimed artists in the world such as Deorro, Aly & Fila and ZAXX to name a few.

Joining the opening act will be also be the up and coming EDM DJ/Producer, DJ K4SH and the Philly-born DJ, Fluencee. K4SH is a dedicated and skilled artist whose work has earned him the opportunity to open shows for some of the biggest names in EDM like Sick Individuals, Dubvision, and DallasK. Following this talent will be Fluencee who takes on a unique twist to pop music through his successful genre blends, which have quickly burst him onto the contemporary crossover scene.

MOTi, A-CRUZ, K4SH, and Fluencee will undoubtedly summon the club party vibes you need for an unforgettable night! Come joins us on Saturday, October 13th at Avalon to witness this cross-national talent first hand. 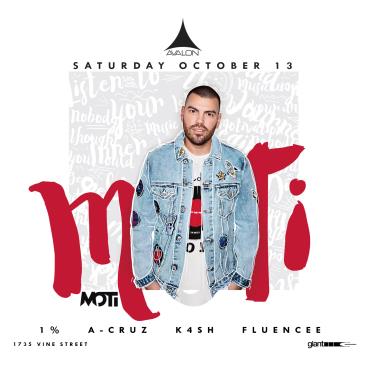