All shows at The Lounge are General Admission and seating is not guaranteed.
Click here to make a reservation and guarantee a seat or call our Box Office at 215-222-1400.

On September 24, Orindal Records will release Mouth Full of Glass, the first solo album by Chicago-based singer, songwriter and multi-instrumentalist Macie Stewart (pronouns: she/her/they/them). Written and recorded while finding solace and strength in solitude, Mouth Full of Glass features eight lushly arranged songs that search for the meaning of self within and without partnership. The record explores loneliness as well as the growth and beauty that blooms from within it - through creating it, Stewart reassesses her own relationships in order to communicate with a singular voice.

Stewart began her musical career at the age of 3. Learning piano while she learned to talk, she discovered two foundational modes of communication at once. As the daughter of a career musician (pianist Sami Scot), Stewart was encouraged to explore the piano and violin, and she became proficient on both instruments. After helping to found the Chicago bands Kids These Days and Marrow, Stewart broadened her interests and spent time in the avant-garde jazz scene, performing regularly at Chicago institutions Constellation and The Hungry Brain. It was in that scene Stewart distinguished herself as a go-to collaborator, co-founding the band OHMME (with Sima Cunningham) and performing and improvising with Ken Vandermark’s Marker ensemble, the improvised act The Few (with guitar player Steve Marquette and bassist Charlie Kirchen) and the violin/cello duo Macie Stewart & Lia Kohl. Stewart has also spent years working as a string arranger, drawing on her varied background in classical, jazz, and Irish folk music to create unique arrangements for artists such as the band Whitney, SZA, V.V. Lightbody, Knox Fortune, and many others.

“I have always been drawn to working in partnership. My creative world thrives when I am able to glance inside someone else’s brain and lock into a rhythm with them,” Stewart says. Years of collaborating helped her develop the musical communication skills she needed to craft a project of her own. At a certain point Stewart realized, “I didn’t know who I was or what I sounded like as an individual. I was floating aimlessly and feeling like so many of my choices weren’t made for myself, but rather for the people with whom I shared a partnership.” She started writing and recording music for Mouth Full of Glass about a year before quarantine with Dave Vettraino engineering and providing additional production, his instrumental ear being a key component in the mixing process. Stewart finished the record during the first months of the stay-at-home orders with Vivan McConnell (V.V. Lightbody) being her remote sounding board for ideas. “While I don’t consider this album a ‘quarantine record,’ finishing it during that time was important because I had to spend the most time with the person I had been avoiding: myself.”

Mouth Full of Glass opens with the bright acoustic flourishes of “Finally.” Confronting herself from the albums’ very first lines, Stewart sings “Finally, finally, finally I learn to tell the truth to myself” as intricate layers of strings and synthesizers cascade, showcasing Stewart’s effortless composition and arrangement skills. On the next track, “Garter Snake,” Sen Morimoto’s saxophone hovers alongside finger-picked guitar, organ and violins as Stewart’s lofty vocal reflects on self-imposed solitude, and the potentially paralyzing nature of one’s own choices. “I am addicted to indecision” Stewart sings. The alternately spelled title track “Mouthful of Glass” draws out long syllables of dulcet vocal harmonies over swirls of keyboards and strings. Written about a dream, the track feels as though you’re witnessing the inner workings of Stewart’s mind. The final track, “Wash It Away” (featuring expertly crafted horn arrangements from Ayanna Woods), does just what the title suggests—clearing the slate and encouraging another listen with fresh perspective. A new start.

Stewart explains, “Life is a perpetual discovery of your own habits and perceptions. This record is about digging into and embracing those less favorable parts of yourself in order to shed them. The hope is always to be present and true with yourself while honoring who you once were, and who you could be. It’s important to give ourselves empathy and space to discover who that is.”

Tucson, Arizona interdisciplinary artist Karima Walkerwalks a line between two worlds. Aside from her long resume of collaborativework with artists in the diverse fields of dance, sculpture, film, photographyand creative non-fiction, Walker has long nurtured a duality within her work asa musician, developing her own sonic language as a sound designer in tandemwith her craft as a singer/songwriter. The polarity within Walker’s music hasnever been so articulately explored, or graced with as much intention, as onher new album, Waking the Dreaming Body.

Waking the Dreaming Body was written, performed andengineered entirely by Walker, with the exception of some subtle upright bassfrom C.J. Boyd on the song “Window I.” Producing the album on her own wasn’tWalker’s original intention, though; after flying to New York in November 2019to develop some home-recorded tracks with The Blow’s Melissa Dyne, a suddenillness forced Walker to cancel the sessions and return home to Tucson torecover, and soon after, the COVID-19 pandemic ruled out the possibility of areturn trip to New York. Instead, Walker decided to finish the album herself inher makeshift home studio. She spent the following months recording, processingand arranging her self-described “messy Ableton sessions” into densely harmonicarrangements of synthesizer, guitar, piano, percussion, field recordings, tapeloops and her own dulcet singing voice, allowing trial, error and intuition toguide her way. The final result is a 40-minute dream-narrative of her consciousand subconscious minds that oscillates between the rich textures of her ambientcompositions (as in the instrumentals “Horizon, Harbor Resonance” and “ForHeddi”) and the melody and poetry of her melancholic, Americana-tingedsongwriting (as in the lyrics-focused tracks “Reconstellated” and “Waking theDreaming Body”), their ebb and flow recalling liminal states of half-sleepwhere images and emotions are recalled and forecasted from the previous night'sdreams. Night falls in regular intervals throughout the album, forming anatural dialogue between waking and dreaming. 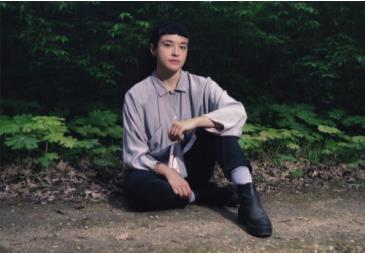