Mark Sixma is an artist whose music is known by the heart of dance music on a global scale. Born and raised in the capital of dance - Breda, the Dutch city that provided the world scene leaders such as Tiesto and Hardwell. He is responsible for some of the most revered timeless dance music and edm anthems.

Mark Sixma is one of the only dance music artist to knock himself off the #1 spot in Beatports trance chats, claiming both the #1 and #2 positions simultaneously. Besides his original tracks, which have been featured in video games and movies, Mark also collaborated with Armin van Buuren, W&W and KSHMR to name a few.

It takes a strong heart and inventive mind to live on the very top of the electronic dance scene – especially if your career spans nearly two decades. Luckily, German producer and DJ Alex M.O.R.P.H. holds both of these, along with a lively spirit that seems to feed on music. His ways with melody are widely known and loved, the M.O.R.P.H. sound a phenomenon that grabs the audience time and again, and the constant drive to reinvent himself is a mere reflection of his ability to stay ahead of the game. Backed up by a long list of highlights, yet ever looking out for the future, Alex M.O.R.P.H. is one of the rare characters to add color to the scene. And he’s not nearly done bringing the world his musical portrait. 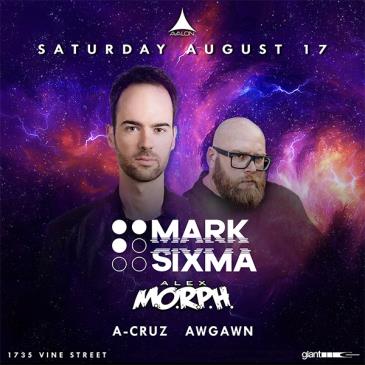