BELLY UP ASPEN IS OPEN AT 100% CAPACITY WITH NO MASK OR SOCIAL DISTANCING REQUIREMENTS.

PROOF OF VACCINATION OR A NEGATIVE COVID TEST ARE REQUIRED FOR ENTRY.

At least 80% of attendees must be fully vaccinated 14-days prior to the show, the remaining attendees can take a COVID test within 72-hours of the show. AT HOME TESTS ARE NOT ACCEPTED. Shows have "vaccinated" and "negative test" ticket types. Attendees must buy the ticket type that corresponds with their day of show status.

This event is all ages.

Reserved seating is available for $398 and guarantees a seat in the reserved section. If necessary, groups will be paired together at tables. Seating is based on time of purchase and the configuration of groups.

There is a ticket limit of 4 GA OR 6 RESERVED per customer based on address, credit card, email address, or other information. Multiple accounts may not be used to exceed these ticket limits. Limits for each show may vary and are listed on the individual show purchase page.

Orders exceeding published limits, or any tickets purchased for resale, or the resale or attempted resale of any ticket at a price greater than face value is a violation of our ticketing policy and we may cancel a portion or all of such orders without notice.  Ticketing violations may result in the  prohibition of future ticket purchases. In each such case, service fees charged for the purchase of tickets may be retained by Belly Up Aspen.  We reserve the right to change the delivery method from Digital Delivery to Will Call for release on the night of the show.

Supporting acts may be changed or cancelled without notice, however such change or cancellation is not grounds for refunds.

Tickets purchased from any source other than bellyupaspen.com or seetickets.us may not be valid and in such case, you will be denied entry to the show.

Inquiries should be made to ticketing@bellyupaspen.com.

ALL SALES ARE FINAL AND WE DO NOT OFFER REFUNDS OR EXCHANGES, EXCEPT FOR CANCELED OR POSTPONED EVENTS (REFER TO SPECIFIC EVENT FOR DETAILS).

Melissa Etheridge stormed onto the American rock scene in 1988 with the release of her critically acclaimed self-titled debut album, which led to an appearance on the 1989 Grammy Awards show. For several years, her popularity grew around such memorable originals as "Bring Me Some Water," "No Souvenirs" and "Ain't It Heavy," for which she won a Grammy® in 1992. Etheridge hit her commercial and artistic stride with her fourth album, Yes I Am (1993). The collection featured the massive hits, "I'm the Only One" and "Come to My Window," a searing song of longing that brought Etheridge her second Grammy® Award for Best Female Rock Performance. In 1995, Etheridge issued her highest charting album, Your Little Secret, which was distinguished by the hit single, "I Want to Come Over." Her astounding success that year led to Etheridge receiving the Songwriter of the Year honor at the ASCAP Pop Awards in 1996. Known for her confessional lyrics and raspy, smoky vocals, Etheridge has remained one of America’s favorite female singer-songwriters for more than two decades. In February 2007, Melissa Etheridge celebrated a career milestone with a victory in the “Best Song” category at the Academy® Awards for “I Need to Wake Up,” written for the Al Gore documentary on global warming, An Inconvenient Truth. As a performer and songwriter, Etheridge has shown herself to be an artist who has never allowed “inconvenient truths” to keep her down. Earlier in her recording career, Etheridge acknowledged her sexual orientation when it was considered less than prudent to do so. In October 2004, Etheridge was diagnosed with breast cancer, a health battle that, with her typical tenacity, she won. Despite losing her hair from chemotherapy, Etheridge appeared on the 2005 Grammy® telecast to sing “Piece of My Heart” in tribute to Janis Joplin. By doing so she gave hope to many women afflicted with the disease.

On October 7, 2016 Melissa Etheridge released Memphis Rock & Soul, her first album since 2014’s critically lauded This Is M.E. Recorded at Royal Studios in Memphis, the album received stellar reviews from the likes of Entertainment Weekly, Parade, Rolling Stone, American Songwriter and more. She followed that up with the release of The Medicine Show in April, 2019. For The Medicine Show, Melissa reunited with celebrated producer John Shanks and sounds as rousing as ever, bringing a new level of artistry to her 15th studio recording. The Medicine Show deals with universal themes of renewal, reconciliation, reckoning, compassion and, most profoundly, healing.

In June 2020 Melissa launched Etheridge TV, an independent channel built on the Maestro platform. Etheridge goes live five days a week for her fans, each day offering something different. That same month Melissa also announced the launch of The Etheridge Foundation. Through the foundation, the singer hopes to raise money to support healthy new research into the causes and effects of opioid addiction. She wants to partner with and support organizations that delve into new ways of understanding and treating underlying mental health issues in conjunction with drug addiction. She hopes to find ways for people to seek treatment outside of pharmaceutical norms and find new answers and relief for those suffering from the devastating effects of addiction. 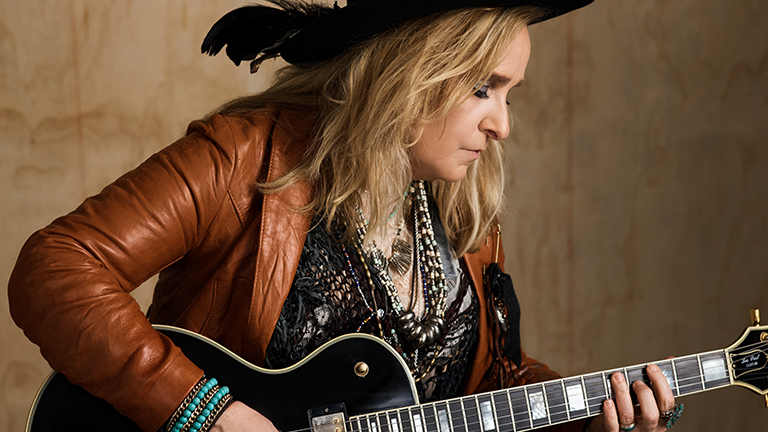