Here's some info I got from Brendog about the band:

The band members grew up all over the country. For example, some members are from Boston, NYC, Indiana, New Jersey, Ohio. The Mephiskapheles are in their mid 20's to early 30's. A few of the Mephiskapheles went to music school while others went to college. Right now, everyone does something different, in terms of jobs outside the band, but all are pretty much employed and most of the band lives in the Manhattan area.

Before the joining the Mephiskapheles, Brendog played in a hardcore band called The Shaved Pigs. Their new drummer, Wayne Dunton, has played Cats on Broadway, and Greg, the trombonist, plays in a band called Herbology.

The Mephiskapheles got together in around 1990 in New York City. They first met at a satanic day camp in the Catskills and started the band as soon as they got home.

The band derived their name from Mephistopheles - a character in the book Faust by Goethe. He was the devil (see above). They picked up their own nicknames (Nightmare, Brendog), in an ordinary fashion (people just started calling others those names).

Currently, the Mephiskapheles are signed on MoonSka, a great record label for ska bands. They've never signed on with another label, and are planning stay with MoonSka.

Musical influences on the Mephiskapheles ranges from The Blue Meanies, to Motorhead, to Metallica, and even Judy Garland.

Brendog says that the ska scene is definitely a lot bigger than when they started out, but whether that's an improvement or not is debatable.

Brendog also dated the sheep on the cover of God Bless Satan for about 3 years. Then that guy in the picture started going out with her. He's a great guy though (his name is Chris and he plays guitar in the NYC Oi Band Urban Riot), so Brendog doesn't mind that they're dating.

The Mephiskapheles' like to wash down their Taco Bell with Guinness, although Brendog said that the chicken on the cover of God Bless Satan was very tasty with mesquite sauce. The creepy voice at the beginning of Satanic Debris is saying the Our Father prayer in Latin. One voice is saying it backwards, while the other is saying it forward. 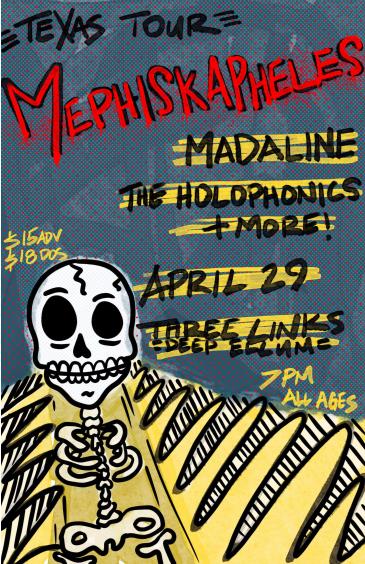