Sergio Mendes turned 80 this year. He’s had an outstanding career as a top-selling artist and record producer, and he is the top living Brazilian musician outside of Brazil. PBS honored him with a special program aired early this summer, watched by millions of viewers. Sergio Mendes broke many barriers - many of his top 40 hits were in Portuguese. His band “Brasil 66”, featuring singer Lani Hall, packed large venues and exposed a whole new generation to Bossa Nova and Brazilian Jazz. Sergio and and his band are still performing and touring. Certainly an inspiration.


Minas, led by the Philadelphia-based music couple Orlando and Patricia Haddad, will bring Sergio Mendes’ music to life with a tribute in The Lounge. Expect to hear hits such as Mais Que Nada, Pretty World, Upa Neguinho, Fool on the Hill, Like a Lover, Night and Day, Tristeza, The Look of Love, and others, including one of the few songs Mendes and Brasil 66‘s lead singer Lani Hall wrote together, the beautiful and lush So Many Stars. Minas will perform as a quintet.


Indicated for 4 Grammy Awards with the latest CD Symphony in Bossa, Orlando and Patricia of Minas were very much influenced by Sergio Mendes Brasil 66, in the early days. Minas will be performing Sergio’s arrangements, as well as providing a taste of the original Brazilian/Portuguese version of most songs.


Orlando Haddad and Patricia King formed Minas in 1978 at the University of North Carolina School of the Arts. They proceeded to play all over the eastern United States before moving to Brazil, where they lived, entertained and traveled, absorbing the essence of Brazilian culture. In 1984 Orlando and Patricia returned to the United States and raised a family while performing and recording extensively, building their reputation as one of the most sought-after Brazilian groups of its kind. Multi-talented as composers, vocalists and instrumentalists, and equally comfortable in Brazilian festive music and jazz, folk and classical genres, Minas has developed various performance styles which have placed them in front of every kind of audience and venue.


In 1962 Sergio Mendes was among a group of musicians invited by the US State Department to present Bossa Nova, the new music of Brazil, in concert at Carnegie Hall. He was offered a recording contract and stayed in the US, making a brilliant career spanning over 4 decades.  A talented pianist and arranger with a knack for picking just the right Brazilian hit (or American/British, as in Cole Porter’s Night and Day, or Lennon/McCartney’s Fool on the Hill), Sergio Mendes had the right formula for success: Bossa Nova mixed with American pop and jazz with English lyrics, delivered by two young attractive American females, backed by a strong authentic Brazilian rhythm section, topped by beautiful orchestration and production. Always in the forefront of pop culture trends, Mendes is still performing and releasing CDs, leaving behind a legacy of crossover Brazilian/American songs that are still worth listening and enjoying.


In compiling the repertoire for the World Cafe tribute, Orlando and Patricia of Minas are still amazed how beautifully put together and elevating this music is. 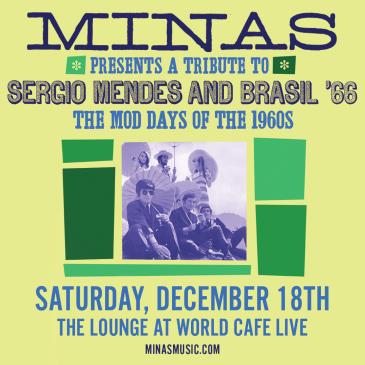