Like a tree with many branches, Moonalice’s members have collaborated with some of the most acclaimed artists in musical history and made an indelible impact on music. Vocalist Lester Chambers co-founded pioneering psychedelic soul group The Chambers Brothers and sang on groundbreaking ‘60s civil rights anthems. Bassist Pete Sears was a founding member of Jefferson Starship and played on Rod Stewart’s seminal albums Gasoline Alley and Every Picture Tells a Story. Guitarist Roger McNamee has been an advisor to the Grateful Dead and U2, wrote a best-selling book, and fights against entrenched power in the tech industry. This only scratches the surface of the band’s numerous collective accomplishments, so it’s safe to say Moonalice’s roots extend deep and wide.

The exuberant Bay Area ten-piece, whose members range in age from 35 to 81, delivers a unique brand of psychedelic soul and rock tinged with Americana. But dig a little deeper and you’ll discover an unparalleled history of musicianship, activism, and a band ethos that’s more vital now than ever.

Moonalice formed in 2007 after acclaimed producer T Bone Burnett approached McNamee about creating a new band in the spirit of the San Francisco psychedelic era after hearing his previous band, Flying Other Brothers. Burnett suggested McNamee form a band with “new songs and a new legend,” and record an album as part of a series of Americana albums he was producing, including Alison Krauss and Robert Plant’s Grammy-winning, platinum album, Raising Sand.

“A lightbulb went off when Lester, Dylan and the T Sisters joined the band,” Sless says. “They have an infectious energy that catches the audience’s attention. All five of them bring a new spark. People realize they really have something to say.”

After a brilliantly received debut at the 2019 LOCKN’ Festival featuring the new ten-piece lineup, the band suddenly found itself overwhelmed with bookings, until restrictions imposed by the Covid-19 outbreak derailed their plans. They took the opportunity to write and record new material and arrange captivating covers of tunes made famous by Lester Chambers and his former band The Chambers Brothers.

At the age of 81, Chambers embodies the heart and soul of the band. The son of Mississippi sharecroppers, he has the energy and spirit of a man half his age. The Chambers Brothers’ song “Time Has Come Today” captured the idealism, frustration and promise of a generation defined by the civil rights movement. Designated a cultural treasure by the City of Los Angeles for their contributions to gospel, folk and R&B, their career took off after performing at the 1965 Newport Folk Festival at the behest of Pete Seeger, and they counted The Beatles (who personally welcomed them on their first trip to England) among their fans. Their hit “Time Has Come Today” topped Billboard charts and earned them a gold record, and they were recently featured prominently in Questlove’s acclaimed 2021 documentary Summer of Soul.

Erika, Rachel and Chloe Tietjen round out Moonalice’s powerhouse vocal section. The sisters, two of whom are new mothers, traveled to the Middle East and North Africa as part of a State Department-sponsored program emphasizing girls’ empowerment and fostering diplomacy through music. They bring formidable vocal skills and songwriting chops to the proceedings as well as angelic harmonies. Singer-songwriter Dylan Chambers is a member of Bay Area rock band Midnight Transit and performs with his father in the New Chambers Brothers.

Meanwhile, bassist Sears was a founding member of Jefferson Starship who collaborated with Grace Slick on songwriting duties, performed on albums with Rod Stewart that helped cement his spot in the Rock and Roll Hall of Fame, and has played with John Lee Hooker, Los Lobos, Sly Stone, David Nelson, Bob Weir, Mickey Hart, and Jimi Hendrix. Lead guitarist and pedal steel player Sless, who has performed with the David Nelson Band, members of the Grateful Dead, and Jefferson Starship, serves as Moonalice’s de facto musical director. Drummer Molo won a Grammy as an original member of Bruce Hornsby and the Range, and has since performed with the likes of John Fogerty, Sheryl Crow, Willie Nelson, and Bonnie Raitt. He now mentors rising artists, including a member of Vampire Weekend, on how to effectively navigate the perils of the music industry. Keyboardist Crosby has played with the likes of Jackson Browne, Bruce Springsteen, Jenny Lewis, and Santana, to name a few.

One of the things that sets Moonalice apart is that McNamee has a day job fighting against entrenched power in the tech industry. He also served as business advisor to the Grateful Dead and partner to U2 frontman Bono as a co-founder in trailblazing private equity investment fund Elevation Partners. He was an early advisor to Facebook who authored the New York Times bestseller Zucked: Waking Up to the Facebook Catastrophe. McNamee frequently appears as a pundit on top media outlets, and recently wrote a Time Magazine cover story titled “Facebook Will Not Fix Itself.”

Innovators and early adopters of technology, Moonalice was the first band to livestream concerts on Facebook Live, and the first band without a label to achieve one million downloads of a song from its own servers. Their popular tune “It’s 4:20 Somewhere” has been downloaded over 4.6 million times to date.  As artists with such a remarkable history of musical collaborations and a deep knowledge of music, they can anticipate each other’s next moves. This enables them to play off each other and create magic when recording and on stage. Moonalice worked with their longtime producer Dave Way (Fiona Apple, Norah Jones, Eric Clapton) on their new recordings, who likes to foster a collaborative atmosphere in the studio where spontaneity and happy accidents can happen.

“That’s what Moonalice is best at—the push and pull of musicians on a stage or in the studio,” Way says. “They create what I call magic, the things you can’t explain.”

Original songs “Nick of Time,” “Woo Woo,” and “Love Me Today” illustrate their incredible chemistry and the evolution of the band’s sound, from country-rock to psychedelic soul with elements of gospel, rock and Americana.

Their new material also includes reimagined tunes made famous by The Chambers Brothers– “Time Has Come Today,” “Love, Peace and Happiness,” and “People Get Ready,” which became an unofficial anthem of the civil rights movement after they recorded it in 1968. Written by Curtis Mayfield, a close friend of Lester’s, its meaning is universal. “Whatever your obligations are or whatever you want to do, you have to get ready to do it,” says Chambers. “It has such an important meaning in all kinds of ways. The Moonalice version has that same outpouring of love and same feeling it did all those years ago. The harmonies are incredible and it’s a great gift to the world. That’s why I insist on singing it at almost every show.”

Although they don’t identify themselves as political, the band’s ethos of “Love, Peace and Happiness,” taken from The Chambers Brothers’ song of the same name, is nothing short of revolutionary in today’s divisive political climate, and it is infused into everything they do.

“We know who we are; we’re love, peace and happiness, an old Chamber Brothers hit we’ve been playing,” McNamee says. “It says what we’re up to. We want to be a beacon of optimism in a difficult time.”

While the sentiment certainly isn’t new and was a large part of San Francisco hippie culture in the late ‘60s that influenced the band, it’s a message that’s sorely needed in a world emerging from the polarizing effects of Coronavirus and the rift caused by the current state of American politics. “There might be a tendency for someone to view the message as blithe or naïve, but the fact that it’s being espoused by people who have been through a lot—Lester in particular—makes it that much more powerful,” Erika Tietjen says.

Throughout his life, Chambers has been the victim of discrimination, denied royalties he was owed from his record labels, and was assaulted on stage a few years ago. Despite it all, he is a paragon of joy and enthusiasm, and uses music to express himself and connect with others. “Bitterness is not the way,” Chambers says. “I’ve forgiven everybody in the world who ever done me wrong. It’s such a happy life to be free knowing you don’t have a grudge against anyone. When people hear the words ‘love, peace, and happiness’ when we sing them on stage—we know they get the idea. Sometimes it works—it makes them think, ‘I could be one of those people who brings love, peace, and happiness to the world.”

“The country is so divided right now—everything has become political,” adds Sears. “We need to heal these wounds and come together on a human level. We use music to break down barriers and get through to people.”

Dylan Chambers also believes in the power of music to convey important messages to their audiences. “We all love each other, and love what we do,” he says. “That resonates with people—being humble, grateful, and proud and having respect for each other.”

Moonalice supports numerous causes, from Stop Hate for Profit, which holds social media companies accountable for hate on their platforms, to playing free shows in veterans’ hospitals and rehab centers.

“I think an important part of Moonalice is the notion that each of us has an opportunity to make a difference,” McNamee says. “We’ve survived a pandemic and a zillion other things. It makes sense to look forward and think about the positive, and remind people that they have a shot at a better day ahead.” 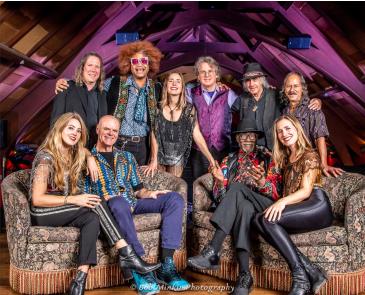