Out Friday 10th February, ‘Starfruit’ is the fifth album from LA-trio Moonchild (Amber Navran, Andris Mattson, and Max Bryk). The result of ten years spent working and growing together, ‘Starfruit’ showcases the respect, musical understanding, and love the trio have, both for each other and for the noteworthy list of collaborators featured on the album. Bringing a host of beautiful melodies and personal lyrics, ‘Starfruit’ beholds offerings from Lalah Hathaway, Alex Isley, Tank and The Bangas, Rapsody, Ill Camille, Mumu Fresh, Chantae Cann and Josh Johnson. “This is our 5th album, which felt like a big milestone to us. They all added their magic touch to the songs and really brought the music to a new and special place,” Amber muses.

Alongside the LP’s extensive list of featured artists, the release sees Moonchild experimenting with new synths and sounds. While still rooted in their trademark tones, these textures and sound palettes elevate ‘Starfruit’ to new and impressive Moonchild musical territory. “Max has this arpeggiator synth patch that makes me so happy every time I hear it, Amber incorporated this super cool octave pedal patch on her vocals and I made a keyboard patch I’m obsessed with,” Andris remarks.

Their first release featuring collaborations, Moonchild take the opportunity on ‘Starfruit’ to work with a number of acclaimed Black female musicians. “I was so overjoyed that they were down and I’m obsessed with everything they did!” Amber enthuses. “All too often Black women don’t get the recognition and credit they deserve for their incredible talent and contributions to the music industry, and in every industry, scene and space. Each one of these women has been a huge inspiration to us and we were so honored to get the opportunity to make music with them”. Each providing their own ‘goosebump’ moment to ‘Starfruit’, the eclectic mix of vocals and lyrics set to the backdrop of Moonchild’s musical synergy and understanding makes for something spellbinding. “My favorite moments are always evolving,” Andris adds. “Beat drops, verses, bridges, outros, breakdowns, clarinets… every song on the album has moments that still give me chills”.

This landmark release follows Moonchild’s critically acclaimed album ‘Little Ghost ’which saw huge support from the likes of Jamie Cullum (BBC Radio 2), Phil Taggart (BBC Radio 1), Jamz Supernova (BBC 1Xtra), Huey Morgan, Cerys Matthews and Don Letts (BBC 6Music), Bradley Zero and from across Jazz FM (who previously named the band Soul Act Of The Year) and KCRW. The album also saw press accolades from Paste Magazine, Vinyl Factory, Soul Bounce, HYPEBEAST, Cool Hunting, Complex and from NPR, with Moonchild’s Tiny Desk Session having now logged over 3.7 million views. Recorded whilst on tour in 2019, the performance has become more pertinent since, with Navran’s call to action for people to “spend their privilege” being widely shared by NPR over the summer of 2020.

Following the release of ‘Little Ghost’, Moonchild played some of their biggest shows to date, toured with Jill Scott, and performed at Tiny Desk before things were cut short due to COVID-19. As Amber explains: “We’ve been processing everything that’s been going on in the world, spending some time away from music, collaborating a lot with other artists, making this new Moonchild album and picking up some quarantine hobbies.”

2019’s ‘Little Ghost’ followed the widely-praised ‘Voyager ’[2017], ‘Please Rewind’ [2015] and ‘Be Free’ [2012] which were shown love by DJs across BBC 1Xtra, BBC 6Music, FIP Radio, KCRW, BBC Radio 2, Jazz FM, Worldwide FM and KEXP. The releases garnered praise from The Fader, Complex, Echoes Magazine, Saint Heron, Kick Mag, KEXP and Okayplayer, with the band racking up over 100 millionplays on Spotify and Apple Music and the video for “The List” gaining 15+ million views on YouTube.

Moonchild have collaborated and toured with highly respected names from across music including Kamasi Washington, Stevie Wonder, The Internet, Jill Scott, have been compared to the likes of Tom Misch and Jordan Rakei and built up a host of iconic supporters from Robert Glasper (who has collaborated with Navran on his own projects) and Laura Mvula to James Poyser, Jazzy Jeff, 9th Wonder and Tyler, The Creator. 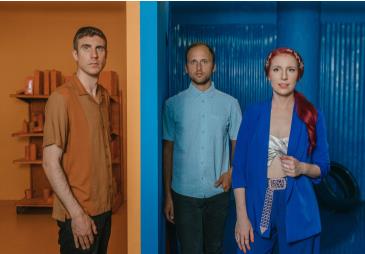