Neko Case steps out, cutting the sky and singing the stars, spinning fury and mercy as she goes. She loves the world and wears her heart on her sleeve, but she might eat it before you get to thinking it belongs to you.


Wild Creatures pulls together some high points of feral joy from twenty-one years of solo work by Neko Case. The Virginian marked Neko’s debut as a solo artist in 1997. She delved into darkness in 2000 with Furnace Room Lullaby, scrawled Blacklisted in 2004 and recorded The Tigers Have Spoken live the same year. In 2006, she dreamed Fox Confessor Brings the Flood, and in 2009 unleashed Middle Cyclone. She plumbed her own life in 2013 for The Worse Things Get, the Harder I Fight, the Harder I Fight, the More I Love You, and raised hell in 2018 with Hell-On. Now in her third decade of recording under her own name, she’s just getting started.


Is there another songwriter so fearless and inventive?  Bending decades of pop music into new shapes, she wields her voice like a kiss and her metaphors like a baseball bat. She has cast the fishing net of her career wide—from Seattle and Vancouver to Chicago and Stockholm, setting up her home base on a farm in New England.


Gathering power year after year, Neko sings with the fierce abandon of a newborn infant crying in a basket in the woods. Since escaping the labels of country and Americana, the gorgeous train-whistle vocals of her early career sit submerged in her later style, where their ghost can appear any minute. When her voice jumps an octave, it’s almost visible, like sparks at night. “I never knew where I wanted to go or what I wanted to do with my voice,” she says, “but I just wanted to do it so bad.”


The world tends to love women singer-songwriters most when they’re wounded and helpless. Neko’s music spans a broader spectrum, from longing to malice. Her lyrics evoke worlds, imagining a woman pilot ready to die, a serial killer, a murdered child, and a tornado, just for starters. Is there any perspective she can’t write a song from or about? “I am a man,” she sings. “I am the man in the fucking moon.”


The Earth, too, and nature itself are wonders for her, from the dangerous attention of dandy wolves to a slaughtered tiger and birds frying on a wire. The world is dear to her, but there’s a lot happening in it that shouldn’t. It’s not her job to comfort you.


You might try to come away from a Neko Case tune without a head full of images—but it’s impossible. Still, her songs won’t tell the whole story, rarely offering a panoramic view or a chronology. Instead, she offers up a series of snapshots, as if from a crime scene, and leaves the audience space to inhabit the closets and cathedrals she’s built.


Neko seems to live to bend the shape of the melodies she writes. Listeners might feel the music going in unexpected directions, as she looks for the note that will negotiate a truce to fuse it to her lyrics. It’s not that you can’t find a verse-chorus-verse structure in a Neko song. But you’re just as likely to find any chorus you hitch a ride with going off a cliff, or to hear a hook you think might be the chorus, only to watch it disappear.


Neko Case songs often exist with distinct sections that recall symphonies. Changing from ballads or waltz time to a rock beat and back, the elements sometimes seem wired together to make an improvised explosive device.


Talking about inspirations, she’s as likely to mention Queen as Patsy Cline. Her work covers a big canvas, including collaborations with dozens of musicians over the years (Paul Rigby, Calexico, and an assorted set of sidemen known as “her boyfriends,” just to name a few).


In studio, Neko obsesses over sound. Always involved with how her albums were recorded, she’s seized and embraced the role of producer. Standing halfway up a half-built stairway, she hammers nails into place as she goes along. Despite blowing every deadline she’s ever been given, Neko feels in her bones when a song or a project is done.


“Music is so weird,” she says, “because you never arrive where you’re going.” If her career were mapped, it might be a choose-your-own-adventure book. She hasn’t masterminded each album with some absolute endpoint in mind. “I’ve never been afraid to ask for help. I’m able to trust myself in the moments where I don’t know what’s going to happen.”


Neko insists on being larger than the narrow space that the world allocates to women. But don’t tell her what kind of feminist she’s supposed to be. There’s a famous dementia test in which you look at the pictures of an elephant or a giraffe and name them. Neko Case is the opposite of that. What if, by letting everything out of these cages, by taking the labels off living things, we had to encounter the world as it really is? The wild things, the lost things, the things that scare you, and the things that you love—what if it turns out all that is really home? What if, by writing about that, you could reinvent the universe?


What if some wild creature drags you out to the woods, but the woods begin to become the whole world, and your earlier home, still visible in the distance, suddenly seems less interesting than where you are now? You might be in the middle of a Neko Case song.


She’s doing it on her own terms, but the legacy she’s building is one that can stand up to music made by any other solo artist in her lifetime. Don’t look away; you never know what might happen. “I’m just trying,” she says, “to be myself as hard as I can.” 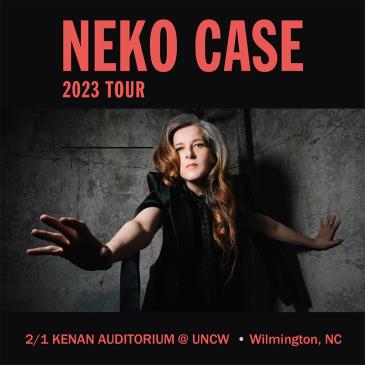