Unforgettable Fishing with Captain Virginia Salvador
Calling all fishing enthusiasts and non-fishing enthusiasts alike! Climb aboard and get your vitamin sea with Captain Virginia of Gatecrasher Fishing as she takes us on a journey through the Bay via her fishing adventures, especially those of promoting the conservation of white sturgeon (the Bay's friendly neighborhood prehistoric fish) during the winter/brackish season. During the saltwater season, you can find her and her team fishing for King Salmon, Halibut, Rockfish and Ling Cod.
Virginia is a biologist, scientist, freelance writer, and co-captain of the Gatecrasher on the prestigious front row of Fisherman's Wharf. She is passionate about sharing catch and release fishing of white sturgeon, traveling to compete in fishing competitions, and her motto is "I don't go fishing to escape my life. I go fishing to live my life!"
The Carnivores in Your Backyard and Abroad with Dr. Christine Wilkinson
Seen a coyote roaming the streets of SF lately? Read all the Nextdoor posts about foxes in yards and parks? Then this is for you! Dr. Wilkinson will delve more into the area of human-wildlife conflict both in our backyard urban areas and abroad. She studies the movement ecology and human-wildlife risk of spotted hyenas in Kenya, and also the socioecological drivers of urban carnivore movement here at home. Come hear about her exciting field work, and the multi-disciplinary solutions informed by it to meet the needs of humans and their carnivore neighbors.
Dr. Wilkinson is an ecologist and post-doc at UC Berkeley. When she's not in the field tracking down hyenas or in the office offering holistic solutions to human-wildlife conflict, she can be found performing with the San Francisco Taiko Dojo and working on her science communication skills through speaking events, workshops, and acting.
Outwrite: The Speeches that Shaped LGBT Literary Culture with Elena Gross
Join curator and culture critic Elena Gross as she shares her work on editing Outwrite, a collection of speeches from the Outwrite conference. This annual meeting, held throughout the 90s, played a pivotal role in shaping LGBTQ literary culture in the United States and its emerging canon. She'll take us behind the scenes of her work in the literary archives and describe how producing the book has inspired a connection to the past as a means of constructing or creating new futures, while also fostering the responsibility of survivors to tell the stories and carry on the legacies of those who did not.
Elena Gross is the Director of Exhibitions and Curatorial Affairs at the Museum of the African Diaspora, and an independent writer and culture critic living in Oakland, CA. She received an MA in Visual & Critical Studies from the California College of the Arts in 2016, and her BA in Art History and Women, Gender & Sexuality Studies from St. Mary’s College of Maryland in 2012. She specializes in representations of identity in fine art, photography, and popular media.

Nerd Nite SF is a monthly lecture-in-a-bar series where we invite interesting people - scientists, historians, game designers, mimes, etc. - to give short talks on their expertise to tipsy nerds. We strive to be playful, entertaining, sometimes a little inebriated or salacious, but always deeply educational. Join us!
https://sf.nerdnite.com/ 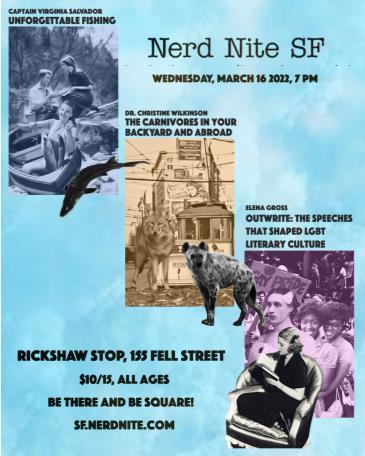