Join us as we think and drink together for our last show of 2021. Thanks to all who have come out and supported us through this especially weird time in event planning. Special thanks to the SF Public Library for supplementing each of our shows this year with library swag and reading lists based on speaker topics, and very special thanks to all of our speakers. We <3 the Rickshaw Stop and our nerdy community.

A decorated historian, author, and businessman, John Templeton is also recognized as the authority on San Francisco’s rich Black history, which is often obscured and little known. He’s set out to tell the stories of how African Americans have contributed to the city’s culture and economic development, going back to the late 19th century. His book Cakewalk explores the key roles African Americans played during the aftermath of the 1906 earthquake and through 1921, the beginning of the jazz age. Copies of his book will be available this evening, and he’ll sign a copy for you!

John Templeton has set out to uncover and preserve a key piece of San Francisco (and California) history that is often overlooked: the formative contributions of African Americans. He’s written books, led walking and bay cruise tours, and established the African American Freedom Trail that documents thousands of historical sites, with hundreds of them here in San Francisco.
The Rottenest City on the Whole Pacific Coast by John Bauters

Emeryville is the Bay Area’s original city of vice. Now known as a city of arts and innovation, Emeryville’s history is replete with gambling, brothels, corruption, scandal, and bootlegging. Supreme Court Chief Justice Earl Warren once labeled Emeryville “The Rottenest City on the whole Pacific Coast.” Come peek behind Emeryville’s modern facade as the home of Pixar Animation Studios and IKEA to learn about it’s grittier days from one of her former mayors and current council members.

John Bauters is the former mayor of and a current council member for the City of Emeryville. When he is not representing the Rottenest City on the Pacific Coast on regional and state transportation, housing and environmental quality boards, he can be found bicycling or hiking the Bay Trail, usually with his dog, Miss Reyna Roo.
Psychological Mythbusting with Dr. Emily Anhalt

Revisit Psych 101 with Dr. Emily. Learn some popular psych concepts and bust some common psych myths, without having to take a test at the end!

Emily is a clinical psychologist and cofounder of Coa, which is a groundbreaking gym for mental health. She’s given many talks to TED audiences and at conferences, but her Nerd Nite appearance will be the most fun and engaging one yet!

Rounding out the evening will be DJ Alpha Bravo, serving us a topical selection of tunes.
*
Nerd Nite SF is a monthly lecture-in-a-bar series where we invite interesting people - scientists, historians, game designers, mimes, etc. - to give short talks on their expertise to tipsy nerds. We strive to be playful, entertaining, sometimes a little inebriated or salacious, but always deeply educational. Join us!
https://sf.nerdnite.com/ 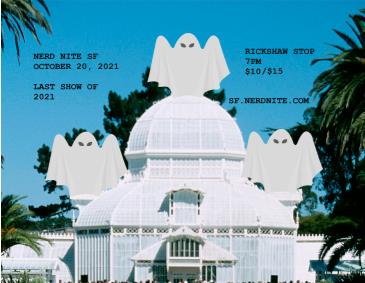