German Trance legend Markus Schulz returns to AVALON Hollywood with another Open to Close set on New Year’s Eve. From beginning to end of the night, the head of Coldharbour Recordings will be bringing in the New Year at one of Hollywood’s most extravagant music venues. Widely regarded for releases on Armin Van Buuren’s Armada Records and recent hits “Running Up That Hill” and “The New World” as well as countless remixes in the likes of  Cosmic Gate, Ferry Corsten, and many other big name artists, Markus Schulz has established himself as a household name within the trance music scene. As the host and spearhead of Global DJ Broadcast, presented on Sirius/XM and DI.fm, Schulz has recently aimed to bring the funky island beats of Ibiza to his listeners via the “Ibiza Summer Sessions.”

Markus Schulz’s DJ and production career have taken him to perform at major music festivals in Russia, Spain, and Belgium, and internationally renowned night clubs, where he has built a reputation for performing 6 hour trance sets. This New Year’s Eve will once again see the return of Markus Schulz to the AVALON Hollywood, where his progressive, feel-good melodies will welcome in 2018. 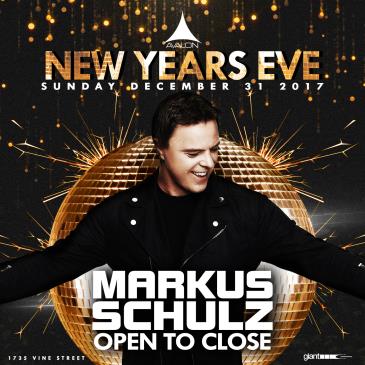