Fronted by Oscar Bugarin and Rae Cole, Calling Cadence is a band rooted in harmony — harmony between voices, between songwriters, and between genres like rock, country, swampy blues and Southern soul.

Calling Cadence, the band's self-titled debut album, showcases a group whose songs nod to the past while resolutely pushing forward. The album was recorded, mixed, and mastered straight to analog tape. Computers were only employed for streaming prep and CD replication. Produced by David Swartz and Matt Linesch, the album is being released on their label, hi-res records. The producers and band thought long and hard about diving into the all-analog domain but came to the conclusion that the final product would benefit in a way that digital would not allow. The 15 songs shine a light on Calling Cadence's strength as a live act, blending Oscar and Rae's entwined voices with vintage keyboards, guitar heroics, and plenty of percussive and low-end stomp. The accompanying musicians on this album include Josh Adams on drums (Jon Batiste, Norah Jones, Devendra Banhart, Beck), Mitchell Yoshida on keyboards (Edward Sharpe & the Magnetic Zeros), and Elijah Thomson on bass (Father John Misty, Nathaniel Rateliff).

For Calling Cadence (whose name pays tribute to Oscar's time in the army), recording to analog tape wasn't just a production choice; it was a way of maintaining honesty with themselves and their audience. Like the classic albums that inspired Calling Cadence's layered vocal arrangements and warm, guitar-driven sound, the record is a genuine snapshot of a band on the rise. 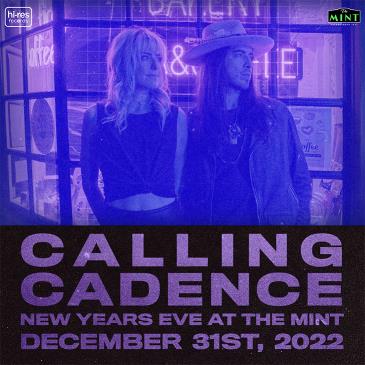