For about 175 years prior to the Trinity test in 1945, exploding wires had been noted but neither understood nor much studied.  The success of implosion fission--reliant on exploding wire detonators--kicked off intense research on ex-wires in the US and abroad, as many parties around the world launched their own weapons development programs.In short, exploding wires made the bomb possible, while the success of the bomb drove decades-long efforts to understand exploding wires.  This peculiar symbiosis has continued ever since, with exploding wires making regular appearances in the historical record of nuclear weapons R&D. This talk will give a very brief introduction to exploding wire phenomena, and survey the role ex-wires have played in nuclear
weapons R&D.

Glenn Carroll is a former Machine Learning researcher with time in both academic and corporate environments. Post-retirement he has kept himself entertained with wide-ranging studies, electromagnetic experiments, and improving the shabby shop skills one might reasonably expect from an ML researcher.  Exploding wire experiments have been a favored pastime for close
to a decade.

Godzilla: History, Biology, and Behavior of Hyper-Evolved Theropod Kaijuwith Shyaporn Theerakulstit
Tsunami, earthquake, hurricane and typhoon all rolled in one, Godzilla, “King of the Monsters,” has both plagued and benefited humanity for over half a century. By examining the origins and zoology of this force of nature, people and nations will be better equipped to deal with the awesome destructive power of our radioactive visitor from the Cretaceous.

Shyaporn Theerakulstit is an actor, writer, YouTuber, cosplayer and general “nerd about town.” He has given talks at Nerd Nites in a half-dozen cities, as well as C2E2, TEDx and the Smithsonian. He has written and produced for Dark Horse Comics and is also the host of “Real/Fake Science” in NYC. His YouTube channel has been featured on Huffington Post and the Comedy Central blog (youtube.com/Shyaporn).

Eat. Sleep. Walk. Repeat with Dwight Asuncion
For over a millennium, pilgrims of all ages, genders, races, religions, and nations have walked the Way of St. James / Camino de Santiago (“the Camino”). The most common route is a 500 mile, 30 day journey starting in southern France and ending in northern Spain, in Santiago de Compostela. What is the Camino? Why has it appealed to religious and non-religious alike through the centuries? In recent years, why have so many people gone? (Since 2013, more than 200,000 pilgrims per year!). Why has it made such an imprint on the pilgrims who have walked it? (Paulo Coelho walked the Camino and named his protagonist in The Alchemist Santiago).
Come learn about why you should consider doing the Camino from Dwight Asuncion, world traveler and travel writer. Dwight has traveled to all 7 continents and 25+ countries and considers his Camino experience the best / most important trip of his life

Nerd Nite SF is a monthly lecture-in-a-bar series where we invite interesting people - scientists, historians, game designers, mimes, etc. - to give short talks on their expertise to tipsy nerds. We strive to be playful, entertaining, sometimes a little inebriated or salacious, but always deeply educational. Join us!https://sf.nerdnite.com/ 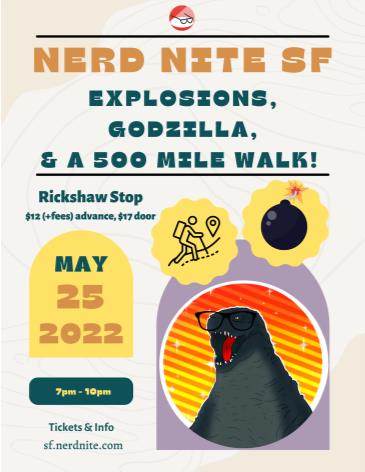