NOTICE REGARDING COVID-19: Beginning February 15, 2022, The Hamilton will require all patrons aged 12 years old or older to show proof that they have received at least two doses of the COVID-19 vaccine before they are allowed entry. This policy is mandated by the District of Columbia. Patrons 18 years old or older must also show valid, unexpired photo ID. Patrons may provide a CDC or WHO vaccination record (original, photocopy, or digital photo), a record of immunization from a healthcare provider or public health authority, or a COVID-19 verification app. More information about this policy is available at https://coronavirus.dc.gov/sites/default/files/dc/sites/coronavirus/page_content/attachments/DCHealthVaxDCGuidanceFAQ1.10.22.pdf

The New Orleans Suspects have been tearing up the festival and club circuits for the past 10 years. This New Orleans Supergroup has been laying down its swampified rock-n-roll throughout North America at a feverish pace. Their music combines irresistibly tight funk, soulful horns, Americana based rhythm and blues, and a pinch of jamband to create a uniquely funky groove.
The group brings together some of the best, most highly respected players in New Orleans including Edward Christmas (John Cleary), Jeff Watkins on saxophone (James Brown Band, Joss Stone Band), Jake Eckert on guitar / vocals (Dirty Dozen Brass Band), CR Gruver on keyboards/vocals (Polytoxic, Outformation), and Eric Vogel on bass (North Mississippi Allstars, Fred Wesley).
The Suspects have released five critically acclaimed albums since 2010. Over the years The Suspects have recorded and performed with such artists as The New Mastersounds, Dr. John, Leftover Salmon, Little Feat, Widespread Panic, Bill Kreutzmann, Col. Bruce Hampton and many others. This has helped the Suspects bring a piece of New Orleans musical heritage to music fans around the globe.

For over three decades, Gros has brought his city’s celebratory culture to listeners around the globe. Gros mixes all the sounds of New Orleans - funk, trad jazz, brass band, blues - and makes it his own signature gumbo. His new solo album Central City, shows Gros capturing New Orleans’ distinct feel-good charm with help from some of its’ most renowned players.
Gros began playing gigs when he was just fifteen years old but didn’t truly kick off his career until after graduating from Loyola in 1989 with a degree in French Horn performance. During the seminal years that followed, the young man cut his teeth as a solo performer on Bourbon Street while also developing a reputation as a formidable sideman. He backed up some of the biggest names in the Crescent City,: such as Meters bassist George Porter Jr. and guitarist Snooks Eaglin. Between 2000 and 2013, Gros began his transition into the spotlight by leading Papa Grows Funk, a highly revered group that mixed hard-hitting funk grooves with often unpredictable jazz spontaneity. The band released six critically-acclaimed studio albums while touring the U.S. and far off countries like Japan and Brazil.
This year, John “Papa” Gros released Central City, his third solo album. The album is a collection of classic New Orleans songs, both new and old, filtered through his decades of dedication to his craft. The album features Gros’ feel good originals alongside his takes on beloved songs by Allen Toussaint, Lloyd Price, and John Prine. Joining Gros on the album are a who’s who in the keepers of the New Orleans tradition, who perfectly exploit the similarities between New Orleans jazz and early rock 'n' roll on songs such as "Yeah Yeah Yeah" and "Personality."
Gros absorbed a lifetime of lessons and became part of the direct lineage of New Orleans music. “I’m walking in the same path as Dr. John, Allen Toussaint, and Art Neville,” explains Gros. “I’ve been following them my whole life. Now, they’re no longer in front of me. They’ve gotten off the path but the path is still very clear.” 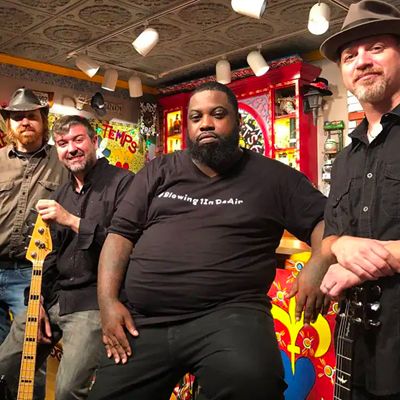