Continuing to capture his creative mindset, vision and the ever-evolving artistry of his music with inspiring, thought-provoking album titles, Nick Colionne calls his latest album Finger Painting for the simple reason that he’s always visualized his Epiphone ES 175 premium guitar as a musical paintbrush painting all the colorful notes he plays.

The vibrant cover painting (originally commissioned by Bettie Grace Miner) features Nick in a bright red shirt and his white Stacy Adams hat surrounded by an impressionistic swirl of multi-hued blues, yellow streaks and a splash of orange. The wild array of colors perfectly reflects the cool multitude of moods, energies and flow that Nick creates over the course of the eleven tracks with longtime collaborators and producers Chris “Big Dog” Davis, James Lloyd (from Pieces of a Dream) and John Blasucci.

“I’ve always been a very visual songwriter, and the music on Finger Painting is no exception,” Nick says. “To help me set different moods, I often change the colors of the lighting in the studio. My creative process always incorporates the idea of thinking in colors, and to use them for inspiration. Part of the joy of making music is figuring out how to translate those visuals into music that taps into and touches on the same emotions. Sometimes they’re in my imagination, but I’m also moved when I see the different colors of, for instance, clouds. I imagine them as islands in the sky. It’s usually during the summer when they’re at their brightest.

“I like to see my music as part of an ever-changing dynamic,” he adds, “and that ensures that when I start a new record it’s going to have a very different vibe than my last one. I always want to create a flow where if your mood changes at any point, you don’t have to change the CD. If you’re grooving on something up-tempo and suddenly want to hear another song that’s slower, laid back and romantic, just keep listening.”

The tunes on Finger Painting powerfully showcase his fresh aesthetic. One of the most remarkable aspects of the project is the batch of seven songs Nick created with writer/producer Chris “Big Dog” Davis, who has worked with the best of the best in urban jazz, including Rick Braun, Kim Waters, Gerald Albright, Norman Brown, Dave Koz and Maysa. Building on a rich sonic chemistry that began when Davis produced “Born Again,” a vocal duet with Maysa on Nick’s 2014 album Influences, Colionne and Davis (credited as writer and producer) weave a dynamic old school meets contemporary groovin’ magic through a sensual, atmospheric re-imagining of “The Closer I Get To You” and six infectious originals – the thumping light funk jam “Let’s Get Serious,” the dreamy and sensual ballad “Romantic Nights,” the briskly rolling, divinely discofied (and provocatively titled!) “Spankies,” a grooved up, brass fired spin “Right Around the Corner,” the buoyant, clapping and thumping soul jazz romp “Riding” and a kick ass, big bandish, jazz and blues driven ode to Nick’s beloved home of “Chi-Town.”

Finger Painting also includes the delightfully mellow and seductive coolness of “Only 2CU Smile,” the whimsical, high octane explosion of “Circles,” and two inspiring songs expressing Nick’s longtime sensual groove connection to James Lloyd – the lush, atmospheric “Call Me Love” and the bluesy, in the pocket, horn-tinged “Just Let It Be.”

While most urban jazz fans started their musical love affair with the ultra-stylish (thanks to those hip Stacy Adams suits and hats) Nick early in the 2000s, folks in “The Big Windy” had been grooving with him years before via his early indie albums, starting with It’s My Turn in 1994. Kicking off his rise to urban jazz superstardom with his breakthrough album Just Come On In (2003) and its hit single “High Flyin’,” he has since mastered the art of Keepin’ It Cool (2006), transcended musical boundaries to explore realms where there are No Limits (2008), fired up his thousands of worldwide fans with Feel the Heat (2011), dug deep into his musical soul to share some of his deepest jazz and R&B Influences (2014) and made history with his 2016 collection The Journey by becoming the only artist in the history of the format to score five consecutive #1 singles on the Billboard Smooth Jazz National Airplay and Smooth Jazz Songs charts from a single album. In 2018, he revealed the secret mindset behind his extraordinary impact. Keeping his incendiary, yet heartfelt mix of jazz, R&B, funk blues and soulful, seductive vocals fresh, funky and innovative every time out, he once again made it a blast Just Being Me.

Nick has received numerous honors throughout his multi-faceted career, including the Wayman Tisdale Humanitarian Award at the 2010 National Smooth Jazz Awards for his ongoing commitment to mentoring children and his work in the community and nationally in support of breast cancer causes. The recipient of the 1996 Malcolm X College Alumnus of the Year Award (he earned his degree there in music), Colionne has devoted much of his spare time over the past 20 years to mentoring children at St. Laurence K-8 School in Elgin, Illinois. His roles include counseling, teaching music, computer music skills and guitar, and assisting with talent shows and holiday pageants.

“I feel like a lot of cats try to emulate other players, especially the legendary figures they’ve been inspired by, but I’ve always tried my best to create and cultivate my own vibe,” says Nick “That includes when I play live, because when I’m up there entertaining, I’m there to make it fun and be a bit of a clown at times, too. But I take making music very seriously and do my best to always make my albums flow the way the music does when I’m onstage. I tell the young kids I mentor that instrumental music tells a story, too – you just have to listen closely for the commas, periods and question marks. After all these years, I’m excited that I’m still able to inspire so many with my Finger Painting.” 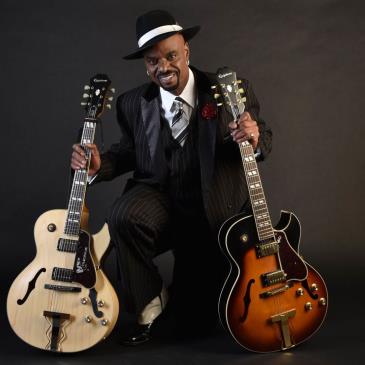