AVALON is summoning the wicked Godfather of trance, Paul Oakenfold, for the Nightmare on Vine Street Halloween celebration. Supporting acts will be from the devilishly talented gremlins Varun and Alexander Dark for this haunting and sinful edition of AVALON’s infamous Saturday night events.

AVALON prides itself on its enchanting ability to attract diverse souls using the best electronic music has to offer, and there is no doubt that souls will be out and about on this night. Get ready to shake your skeleton with dance music mastermind and party monster Paul Oakenfold on the decks, while wearing your most creative costumes that would even shock the deceased.

Paul Oakenfold is globally recognized as one of the pioneers of the trance genre. There is no question on how the man has built an empire for himself for over three decades now as a revolutionary and innovative producer and DJ. Landing himself two Grammy nominations, not to mention his climbing of Mount Everest where he DJ’d atop of it, he has branched his skills effectively outside of the EDM world. With other notable feats under his belt, including DJing the Great Wall of China, The Hollywood Bowl, and even being the first DJ to play mainstage at Coachella. Now, the pioneer has a forthcoming set at none other than Stonehenge, which has caught the attention of Stereogum, Billboard, Resident Advisor and more.

In the past, Paul has collaborated with other legends like the pop star Madonna, and Irish rock band, U2. Weaving his way into the film industry, he is responsible for creating impeccable soundtracks in some of Hollywood's top leading movies like Matrix Reloaded, Swordfish, The Bourne Identity and many more. Paul is known to also deliver some of the best DJ sets in the world.

Don’t miss the infernal return of Paul Oakenfold for AVALON’s Nightmare on Vine Street, with support from the spine-chilling acts of Varun and Alexander Dark. Make sure to dress for a night you wish to never confess and experience best nightmare you’ll ever have. 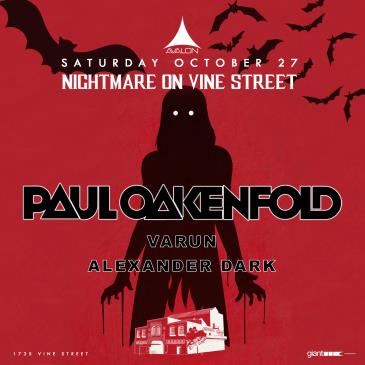